On 25 February 2015, the State Party submitted a state of conservation report; which is available at https://whc.unesco.org/en/list/356/documents The State Party also submitted in November 2014 progress reports on the restoration of the Church of the Nativity.

Considerable progress has been made with the roof restoration and this is now substantially complete.

Although a Conservation Plan document has been submitted, this is more of a generic conservation approach rather than a document that justifies specific interventions within the restoration work of the Church of the Nativity.  It is now too late for such a document to be produced, as the main decisions on the restoration have been made and the work undertaken. It remains unclear how the very detailed surveys and analysis that were undertaken were used as a basis for deciding on specific interventions. Although extensive surveys of the roof timbers have produced evidence for structures dating back to the 14th century, it is not clear from the documents provided which of these have been retained or repaired, nor where “ancient” timbers imported from Italy were inserted. Given the extreme significance of the Church of the Nativity, and the particular importance of its roof, a more detailed level of specification should have been provided, based on a summary and review of existing knowledge, in order that there was a clear rationale and documentation for how each of the trusses and purlins were conserved.  Such an approach would have provided an understanding of the precise dating of each timber and of the overall authenticity of the roof.  It is suggested that a record now needs to be provided retrospectively.

Therefore, it should be noted that, if an extension of the project to encompass further work on murals, facades and the Narthex is envisaged, it should be preceded by the preparation of a comprehensive conservation plan, on the basis of due analysis and studies, which is submitted for review.

A DSOCR and corrective measures have been agreed between the State Party and the Advisory Bodies, and it is suggested that these should be recommended for approval.  The danger to the property was not defined in the Committee decision at the time of inscription or in the Statement of Outstanding Universal Value (OUV) agreed by the Committee in 2012, and thus has to be inferred from the Nomination dossier and the ICOMOS evaluation. It is suggested that the danger should be considered to be the lack of repair and conservation of the roof structure of the Church of the Nativity and the consequent threat to the roof timbers, roof covering, and the interior wall surfaces from water ingress.

The new Regulatory Byelaws for the Historic Centre of Bethlehem and those proposed for the wider setting are to be welcomed, as is the aim to reduce traffic from the Pilgrimage Route. Proposal for a possible tunnel under Manger Square is preoccupying and does need to be submitted for review at the earliest possible conceptual level. 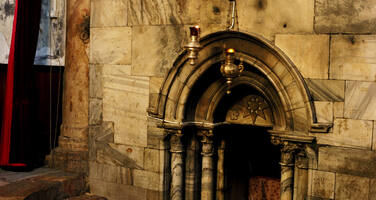