Development projects, threats to monuments’ foundations due to geological instability of riverbank

The World Heritage Centre received a progress report from the State Party on 29 January 2005.

The State Party proposes to reconstitute a coordination committee which had previously existed for monitoring development activities and management of the three World Heritage properties in the Agra District, and to include other stakeholders in order todiscuss the modalities of an integrated Management Plan taking into account the recommendations of the World Heritage Committee.  Such a Management Plan, integrated into the regional planning framework, would include a common visitor Management Plan, the upgrading of the protective boundary and buffer zone as well as the setting up of a monitoring system for the properties.  The State Party intends to avail itself of the services of a multidisciplinary team from the New Delhi University School of Planning and Architecture to develop the Management Plan.

Following the recommendations of the 2004 World Heritage Centre / ICOMOS mission, the Archaeological Survey of India (ASI) further notes its intention to carry out a study to identify and integrate “pockets which have historical relevance”; to develop a proposal to integrate the Taj Mahal and Agra World Heritage monuments including the Mehtab Bagh, the green belt between the Taj Mahal and the Agra Fort and a section of the Yamuna River.  The State Party also plans to develop a comprehensive site Management Plan for the Taj Mahal, Agra Fort and Fatehpur Sikri using an integrated approach and methodology.

Efforts have been also made to place on-site interpretation centres and visitor facilities in the two courtyards adjoining the main gate of the Taj Mahal, for which works are in progress.  Plans are also under way to develop a similar facility near the Agra Gate in Fatehpur Sikri.

The State Party should be commended for the significant efforts made to address the concerns of the Committee.  If the intention of the State Party is ultimately to re-nominate the property as a single World Heritage property, careful attention should be given to study the form and extent of the nomination and its boundaries, which may include the Taj Mahal, Agra Fort, their related monuments and gardens and possibly Fatehpur Sikri.  Concerning the suggestion made by the State Party to include a “stretch of the Yamuna River” in a future integrated World Heritage area, it would be important to study carefully this extension keeping in mind the previous mission recommendations.

ICOMOS also stresses that any site Management Plans should ensure a protective response to the World Heritage values recognized at the time of inscription of the properties.  In order to ensure that the proposed integrated Management Plantakes due consideration of those values identified and recognized as a result of a possible consolidated nomination, it is important to build consensus around the nature of this possible nomination and its associated values as quickly as possible.

3. Commends the State Party of India for the steps it has taken in response to the Committee's requests;

5. Recommends to the State party, in developing such an integrated  management plan, to define the ultimate form and extent of the possible re-nomination based on careful studies and considerations, taking into account the World Heritage values recognized at the time of the inscription of the properties and in close consultation with the World Heritage Centre and the Advisory Bodies;

6. Requests the State Party to submit a report on the progress made on the development of the integrated management mechanism of the three properties, by 1 February 2007, for examination by the Committee at its 31st session (2007). 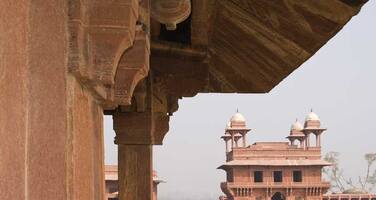