At the July 1992 meeting of the Bureau, IUCN noted concern over an increase in forestry activities and road construction and suggested a mission to review conditions in this mixed site. The Greek authorities at the time did not feel this was needed and the issue was dropped.

A new report, however, issued in September 1993 by WWF and the Ecumenical Patriarchate of Constantinople (EPC) on the ecological status of the area, suggests that this concern be raised once again. In fact, many new roads have been built and many trees cut. There were also reports of overgrazing, chemical pollution from increasing use of fertilisers and pesticides, proposed hydrodam construction, inadequate sewage disposal, open refuse dumps and planting of inappropriate tree species. Some of the monasteries surveyed were sympathetic to conservation but many others were carrying out activities that are inconsistent with its World Heritage Status.


There appears to be a need for impact studies, forest management plans and a system of reserve on Mount Athos. IUCN supports the recommendations made in the WWF/EPC report and would urge action before further damage is done.


The Bureau should take note of the WWF/EPC report and request the authorities in Greece to contact the WWF office in Athens and report back to the next Committee on the status of the natural heritage of the site.


Oikononou, Dimitrios et.al. 1993. Final Report of the Ecumenical Patriarchate, WWF International and WWF Greece Team on the Ecological Status of the Monasteries of Mount Athos. 25 p. plus appendix. 66 p.

A report prepared by WWF and Ecumenical Patriachate of Constantinople (EPC) has pointed out that the ecology of this site is being impacted by overgrazing, chemical pollution and forestry activities. In early December the World Heritage Centre received a letter from the Greek authorities outlining the measures which are being implemented to address these concerns. The Committee requested that a field review together with the appropriate Greek authorities be carried out to evaluate these conflicting reports.

The Bureau recalled that at its sixteenth session it noted concern over increasing forestry activities at the site, however, no mission was carried out. A recent report by WWF and the Ecumenical Patriarchate of Constantinople (EPC) on the ecological state of the site indicates serious threats, including overgrazing, chemical pollution as well as a proposed hydrodam construction. IUCN stressed the need for impact studies, a forest management plan and a system of reserves. The Bureau took note of the report and requested the Centre to write to the appropriate authorities transmitting its concerns with regard to the content of the afore-mentioned report. A report should be requested from Greece for presentation to the eighteenth session of the Committee. 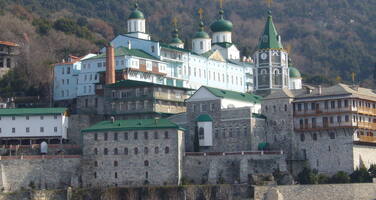