Total amount provided to the property: 30,500 Euro from the ‘France-UNESCO Convention’ for preparation of the monination file and the management plan.

Upon request by the Minister of Natural Resources and Environment of Thailand, and with the consent of Cambodia, a copy of the documents, the Management Plan for the property of the Temple of Preah Vihear, including the revised map was handed over to the Thai Delegation to UNESCO by the Assistant Director-General for Culture of UNESCO on 9 September 2010. These documents were also shared with ICOMOS during the 34th session of the Committee (Brasilia, 2010).

The Management Plan was prepared by the State Party of Cambodia during 2009 and benefitted from several technical missions to the property by a team of international experts. It was submitted to the World Heritage Centre on 1 February 2010.

On 6 December 2010, the State Party of Cambodia submitted to the World Heritage Centre an international assistance request to organize a technical seminar on the conservation, preservation and management of the Temple of Preah Vihear. The request was favourably reviewed by the Advisory Bodies (ICOMOS and ICCROM) and the World Heritage Centre in January 2011 and was recommended to the Chairperson for approval of the requested amount of USD 30,000 on the condition that experts/participants from Thailand would be also invited for this activity. Due to the subsequent developments in and around the property, the request is pending approval by the Chairperson.

In early February 2011, the tense situation along the Cambodian – Thai border led to the increased tensions and confrontations between the two countries since their recent confrontation began in 2008. As reported by both sides, armed forces exchanged fire, from 4 to 7 February, causing a number of civilian and military deaths, displacement of civilian populations and physical destruction.

UNESCO does not have first-hand reports of the situation on the ground. Both sides have provided their accounts of the events in several letters that have been communicated to the Director-General of UNESCO, Chairperson of the Committee or the Chairperson of the Executive Board.

UNESCO followed the situation closely and repeatedly urged both States Parties to resolve the dispute peacefully and to defuse tension around the property. With a view to better assessing the situation and moving towards a dialogue between the two sides, the Director-General of UNESCO decided to dispatch, a Special Envoy mission by the former Director-General, Mr Koichiro Matsuura from 24 February to 1 March 2011. Mr Matsuura met with the two heads of Government in their respective capitals to encourage them to pursue dialogue and cooperation. As a result of this mission, it was agreed that a bilateral meeting between Cambodia and Thailand, facilitated by the UNESCO Director-General, take place on 25 May 2011 at UNESCO Headquarters in Paris, before the Information Meeting of the World Heritage Committee, scheduled for 26 May 2011.

On 26 April 2011, further escalations occurred in an area west of the property between the two military troops in the border area between Cambodia and Thailand.

The fighting in February and April 2011 was more sustained, and reportedly included the use of heavy weapons. Prior to the clashes, both countries had reportedly reinforced their military deployment in the region after a disagreement over the presence of national flags in the disputed zone. As a result of the fighting, several thousand of civilians were reported to have been displaced in both countries.

An Emergency Assistance request for an amount of USD 74,422 from the World Heritage Fund was submitted by the Secretary-General of the Cambodian National Commission for UNESCO to the World Heritage Centre on 13 April 2011. The project aims to undertake emergency cleaning and conservation interventions at the property. At the time of preparing this report, the request has been evaluated positively by the Advisory Bodies (ICOMOS and ICCROM) after several clarifications were sought from the State Party of Cambodia. The request requires the approval of the Chairperson of the World Heritage Committee.

The Director-General of UNESCO facilitated individual and bilateral meetings between the delegations of the Kingdoms of Cambodia and Thailand on 25, 26 and 27 May at the UNESCO Headquarters in Paris. The two parties reaffirmed their commitment to ensuring the protection and conservation of the property and preventing future damage. The need to implement urgent repair and restoration measures was also recognised, as was the need to continue dialogue and consultations leading up to the 35th session of the World Heritage Committee.

The World Heritage Centre and the Advisory Bodies consider it is important to re-establish a dialogue between the parties at the earliest possible time in order to prevent damage to the World Heritage property.

3. Thanks the Director-General of UNESCO for dispatching her Special Envoy, Mr. Koïchiro Matsuura, to the Kingdoms of Thailand and of Cambodia in February 2011 with a view to resuming dialogue between the two parties;

4. Appreciates the efforts of the Director-General of UNESCO in facilitating individual and bilateral discussions between the two parties at UNESCO Headquarters in May 2011;

5. Acknowledges the good will of the parties and reaffirms the need to ensure, in accordance with the Operational Guidelines, the protection and conservation of the property from any damage;

6. Encourages the States Parties of Cambodia and Thailand to use the 1972 Convention as a tool to support conservation, sustainable development and dialogue.

The draft Decision will be presented to the World Heritage Committee during the session. 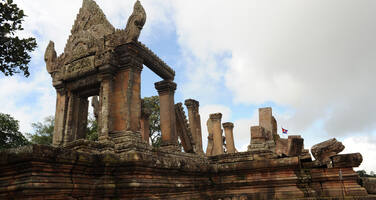