Earthquake risk: On 22 March 2001, a strong earthquake occurred in the Hiroshima Area of Japan, where this site is located but no direct damage was reported.

By letter of 2 April 2001, the Secretariat expressed its concerns for the victims of this natural disaster and asked the Japanese authorities for information concerning the state of conservation of the Itsukushima Shinto Shrine World Heritage site.

By letter of 20 April 2001, the Permanent Delegation of Japan to UNESCO informed the Secretariat that slight damage to Honsha, Haraidan, Hirabutai as well as Kairo had been observed. However, the damages were limited and the necessary conservation work could be easily undertaken. The authorities informed the Secretariat that the World Heritage values of the property had not been affected.

The Bureau expresses deep sympathy for the citizens who suffered from loss of property caused by the large scale earthquake of 22 March 2001 in the Hiroshima and Itsukushima areas. The Bureau takes note of the state of conservation of the Itsukushima Shinto Shrine submitted by the State Party and requests the authorities to inform the Bureau on the progress made in restoring the damaged monuments within the site for examination by the Bureau at its twenty-sixth session.

V.233     The Bureau examined further information transmitted by the State Party to the Centre concerning the destruction caused by the 24 March 2001 Geiyo Earthquake, which resulted in minor damage to the Honsha-Haraiden, Sessha-Marodo-Jinja, Higashi-Kairou, Massha-Hokoku-jinja-Honden and Sessha Omotojinja-Honden. The damaged parts of these buildings were restored in May 2001 by the responsible authorities, following international conservation norms. Minor damage to stone walls observed in certain areas have been recorded and preparation is underway to financially and technically support the rehabilitation of these areas within the fiscal year of 2001. The Centre informed the Bureau that, upon evaluation of the minor damage caused by the Geiyo Earthquake and the swift conservation measures undertaken by the authorities concerned, the World Heritage values of the site have not been affected.

V.234     The Bureau expressed deep sympathy for the citizens who suffered from loss of property caused by the large-scale earthquake of 24 March 2001 in the Hiroshima and Itsukushima areas. The Bureau took note with appreciation, of the report on the state of conservation of the Itsukushima Shinto Shrine submitted by the State Party. Congratulating the authorities on the rapid measures taken to rehabilitate the damaged buildings within the Shrine, the Bureau requested the authorities to inform the Centre when restoration is completed. 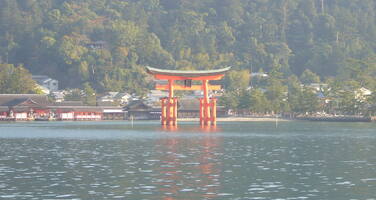