The Centre was informed by the national authorities that the Ministry of Transport was planning an expansion of the port located within the site in order to improve facilities as a pleasure port.  The mission which visited the site last December mentioned in its report that it was obvious that the expansion of the port would bring further leisure components such as shops, parking, restaurants, hotels, etc which would be detrimental to the value of the site.  Consequently, in April the Centre sent a team of specialists from the Delft University of Technology to prepare alternative proposals and to formulate the first stages of a master plan scheme for the site and the town of Byblos.

The mission and the concerned national authorities agreed on the relocation of the new harbour to a place about three hundred meters north of the site limits. Moreover, facilities for the new port such as, connection road, shops, parking, etc will be located outside the site.

After having taken note of the report of the Secretariat, the Bureau warmly commends the Lebanese authorities’ for their co-operation and their decision to change the location of the new harbour. The Bureau also urges the authorities to launch the preparation of the management plan for the site in order to prevent further uncontrolled developments within the site.

After having taken note of the report of the Secretariat, the Bureau warmly commended the Lebanese authorities for their co-operation and their decision to change the location of the new harbour. The Bureau also thanked the Technical University of Delft for its contribution and requested the authorities to begin the preparation of a management plan for the site in accordance with the recommendations of the specialist mission of the University, thus preventing other uncontrolled development taking place within the perimeter of the property, and improving its protection and enhancement. 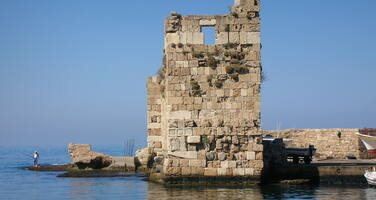