In spite of the international seminar on "Heritage and Urbanism" which UNESCO had organized from 16 to 20 January 1995, in Fez, in close collaboration with the Moroccan Ministry of Culture, and which brought together about forty national and international experts, UNESCO was informed in June 1995 that almost a hectare of gardens and buildings had been destroyed in Ain Azliten, in the northern part of the classified perimeter of the Medina of Fez, in order to construct a tar road.

Informed about this project, the experts expressed deep concern and affirmed their strong opposition to all such projects for new motorways which would involve the irremediable destruction of the social and urban tissue, and they requested that innovative and global solutions be studied for urban development.

These recommendations were endorsed by the Executive Board and by the Director-General of UNESCO during the 146th session, held in Fez on 3 and 4 June 1995.  The Executive Board had also adopted the "Declaration of Fez", which particularly underlined the necessity to conserve the cohesion of the historical urban tissue of the towns inscribed on the World Heritage List, and notably referred to Fez as a model.

By letter of 22 December 1995, the Centre informed the Moroccan authorities of the concern of the World Heritage Committee with regard to these road construction projects and requested them to provide information on the measures undertaken to remedy the situation.

By letter of 15 February 1997, Mr Abdallah Azmani, Minister of Cultural Affairs, indicated to the Centre that the central government authorities, as well as the provincial and local authorities, had been contacted and informed of the Committee's concern "in order that the principles for the preservation as defined by the World Heritage Convention be respected".  By letter of 28 March, the Director of Cultural Heritage of Morocco transmitted to the Centre a report confirming the wish of the national authorities to preserve the site and indicating that the new plans for access to the Medina were completely different from the initial projects and did not include the construction of motorways.

The Bureau took note of the information provided by the Moroccan authorities according to which the road construction projects through the Medina had been abandoned and congratulated them for the measures undertaken to preserve the site.

The Bureau took note of the information provided by the Moroccan authorities according to which the road construction projects through the Medina had been abandoned and congratulated them for the measures undertaken to preserve the site. 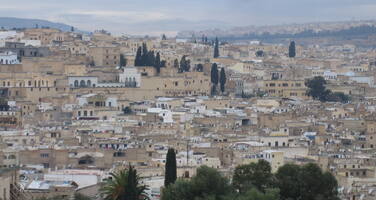