The Spanish authorities have presented an information note on the Mosque which can be summarized as follows:

"Whilst carrying out work on the roofs of the Mosque-Cathedral of Cordoba, the conservation architects discovered damage caused by termites in certain places. However, no activity of termites was apparent. Therefore, as a preventive action all wooden elements are being systematically treated with appropriate chemical products, and adequate conservation measures are being taken.

The Board of Culture and Environment of Andalusia which is responsible for this problem, is carrying out a follow-up of the state of conservation of the building, and over the past few years has carried out studies and diagnostics of the Mosque within the "Sectorial Plan of the Cathedrals of Andalusia" which, in turn, has carried out conservation and restoration work of the building and all the moveable properties.

At present, the afore-mentioned Board of Culture and Environment is preparing a new conservation project with a budget of approximately 30 million pesetas for 1994 and 1995, for the restoration of the galleries of the patio for ablutions, as well as for wood treatment, according to the procedure that has been followed until now. In the event that the diagnostics being carried out reveal the presence of termites in this part of the building, it is possible that the works will include the construction of a barrier in the subsoil of the exterior perimeter of the basement of the building to prevent the entry of these insects".

Extension and Change of Name: The Historic Centre of Cordoba (extension of the Mosque of Cordoba) (Spain)

The Committee approved the extension of the existing World Heritage site of the Mosque-Cathedral of Cordoba to include its surroundings and endorsed the suggestion made by the Delegate of Spain to adopt the name "The Historic Centre of Cordoba". 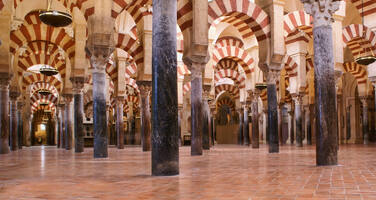