State of Conservation Mont-Saint-Michel and its ... 2003
Print

The French Ministry of Ecology and Sustainable Development informed the Secretariat on 18 February 2003, of the protection and enhancement programmes for Mont Saint-Michel and its Bay. The protection and presentation of Mont Saint Michel and its Bay is the subject of two programmes, initiated by the Government in 1995. On the one hand, there is a project for the re-establishment of the maritime character of Mont Saint Michel, including the island itself and its anchorage to the continent and, on the other, the ‘Opération Grand Site’ (OGS) involving all the riparian districts of the Bay concerned by World Heritage.

1) The project for the re-establishment of the maritime character of Mont Saint Michel: this project is placed under the responsibility of the local communities, grouped together as a mixed syndicate, in which the Lower-Normandy region plays a leading role. The complexity of the project has required a preliminary, lengthy study phase and consultation that was completed with the closure of the public enquiries. The broad outlines of the different elements of this programme have not been decided upon: a new dam on the River Couesnon; a footbridge for access to the Mont Saint Michel; a shuttle service; parking lots.  A competition for the work plan was held for these components and the winning projects were selected. These projects are contained in the document in Annex.

2) The ‘Opération Grand’ site: As the Bay of the Mont Saint Michel extends over two administrative regions, the regional directorates for the environment of Brittany and Lower Normandy jointly pilot this programme through a partnership with the local communities concerned. Two technical programmes have been developed for the work, to encourage better management of the protected areas of the listed sites, to improve the quality of the overall landscape and enhance the rich heritage of the Bay. In parallel, the State is pursuing a line of reflection to extend the protection of the inscribed sites, in particular the areas adjacent to the project for the re-establishment of the maritime character of the Mont Saint Michel and especially the area south of La Caserne. Finally, the Prefet of the Manche is establishing an observatory to measure visitor frequentation that will contribute over the long-term to the development and service requirements in accordance with the visitor carrying capacity of the Bay of Mont Saint Michel.

1. Taking note of the development of the project for the re-establishment of the maritime character of the Mont-Saint-Michel prepared by the State Party,;

2. Congratulates the State Partym for their continuing commitment to the protection of the World Heritage property;

3. Recommends to the State Party that it takes into account the needs of the residents of the Mont-Saint-Michel in the implementation of the project,

4. Requests the World Heritage Centre to continue working with the State Party and to keep the Committee informed.

1. Taking note of the development of the project for the re-establishment of the maritime character of the Mont-Saint-Michel prepared by the French authorities,

2. Congratulates them for their continuing commitment to the protection of the World Heritage site,

3. Recommends to take into account the needs of the residents of the Mont-Saint-Michel in the implementation of the project,

4. Requests the Centre to continue working with the French authorities and to keep the Committee informed. 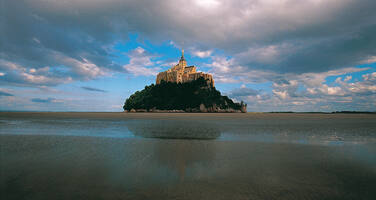