On 21 January 2003, the Director of the World Heritage Centre expressed his concern to the Ambassador and Permanent Delegate of China to UNESCO over the news that the Yuzhen Palace, one of the properties of the Ancient Building Complex in the Wudang Mountains World Heritage property in China, had been destroyed by fire. This Palace was a complex of 236 square meters, built in 1412 and restored in the 18th century. The Centre, expressing deep regret over this loss, requested the Chinese authorities to provide information on the state of conservation and damage to the property.

On 4 April 2003, the State Administration of Cultural Heritage of China confirmed to the Centre that the Yuzhen Palace, a provincial-level cultural relic property located at the foot of the Wudang Mountain, had indeed burned down on 19 January 2003 after the residents had changed the lighting wire without the authorities' approval. Since the accident, the Hubei Provincial Cultural Heritage Bureau and the local authorities have taken measures to: (i) explore further cause of fire and examine safety measures of the whole property to eliminate the possibility of similar accidents in the future; (ii) take legal action against the person responsible for the fire accident; (iii) survey and record the remains of the ancient building affected by the fire; (iv) reclaim the use of all the historic buildings which have been leased; (v) enforce a rule which requires that the site management authority signs a safety responsibility contract with specific protection units; (vi) provide training on fire-protection and equip the site management authority with 12 sets of high-pressure water pumps at the main fire-prone areas and establish on-site fire fighting teams; (vi) improve the surrounding environment of the historic buildings.

According to the authorities, the lessons learnt from this fire accident were publicized by the SACH through its administrative circulars. Moreover, the SACH dispatched five safety inspection teams to check the existing system for fire protection and other safety measures at all the cultural World Heritage properties as well as national treasures in China. The SACH wishes to strengthen co-operation with UNESCO and other organizations to enhance fire prevention of timber structure ancient buildings.

1. Having examined the state of conservation of this property,;

2. Commends the State Party for its immediate follow-up action in addressing the disaster prevention mechanisms at all the cultural World Heritage properties in China;

3. Requests the World Heritage Centre and the Advisory Bodies to strengthen co-operation with the State Party to mobilize technical assistance for enhancing preventive conservation mechanisms for timber architectural heritage in China;

1. Having examined the state of conservation of this property,

2. Commends the State Party for its immediate follow-up action in addressing the disaster prevention mechanisms at all the cultural WH properties in China,

3. Requests the WH Centre and the Advisory Bodies  to strengthen co-operation with the State Party to  mobilize technical assistance for enhancing preventive conservation mechanisms for timber structure heritage in China;

4. Requests the State Party to submit a progress report, by 1 February 2004, on measures taken to enhance the state of conservation of the property, for examination by the Committee at its 28th sessionin 2004. 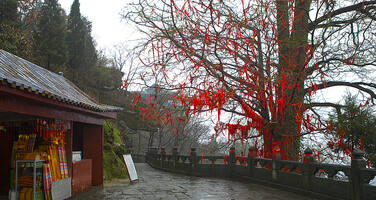