In September 2002, the Centre participated in the mid-term review of the project “Safeguarding and Enhancement of Mauritanian Cultural Heritage” (PSVPCM) co-financed by the Government of Mauritania and The World Bank.  Following a revision to all the components of the project, the Pilot Project “Safeguarding and Development of Four World Heritage Cities in Mauritania”, elaborated by the Centre, was integrated into the PSVPCM Project.  An amount equal to US$ 1,245,000 was allocated by the State Party, with the support of The World Bank (IDA/BIRD), for the implementation of this Project.  A tripartite Agreement was signed between the Government of the Islamic Republic of Mauritania, The World Bank and UNESCO for the implementation of the activities in the four Mauritanian World Heritage towns, as a pilot project.

All of the Pilot Project activities will be carried out by the French consultant services, ACT Consultant, associated with a Mauritanian consultant service, both selected following a limited invitation to tender.  In accordance with the contract signed with the PSVPCM Permanent Secretariat, they should achieve the following objectives: - elaborate master plans for the four ancient towns, as well as technical guidelines and methodologies for their rehabilitation; - elaborate a strategy to review all the rehabilitation initiatives of the historic centres of the ancient towns and initiate the sustainable socio-economic development of the local communities of these towns; - study the feasibility of this intervention activity by way of test work programmes.

The World Heritage Centre is responsible for the technical co-ordination of this project, and an amount of US$ 40,860 is reserved for that purpose.  The work in the four towns of Chinguetti, Ouadane, Tichitt and Oualata is foreseen to start in June 2003.  The duration of the Pilot Project is estimated at 15 months.  Upon termination of the Pilot Project, and in order to ensure its sustainability, the consultant team shall propose the creation and establishment of a permanent advisory structure for the conservation, rehabilitation and construction issues in the ancient centres.  The possibility of attaching this structure to a national permanent body should be envisaged. To this end, the consultant team shall recruit four technicians who would have the task of integrating the local staff upon termination of the project.  They would be trained not only in safeguarding measures, but also in urban management.

The provisional report concerning an organizational audit of cultural institutions in Mauritania by a Tunisian Office, TEC, was made public in the presence of The World Bank, all the responsible authorities of the institutions concerned and the World Heritage Centre.  This report comprises a number of recommendations and an action plan to establish institutional coordination based on the definition of the competences of the bodies and particularly the National Foundation for the Safeguarding of the Ancient Cities (FNSVA).  The World Bank called upon the persons in charge of the PSVPCM Project to finalise with TEC, and as soon as possible, the proposals for institutional reinforcement and to identify accompanying measures that could be introduced with support from the PSVPCM Project.  At the same time, the collective development of the four ksour could be accompanied and strengthened by the establishment of decentralized cooperation and twinning between European cities and the four ancient towns, based on the reforms for decentralization being instituted in Mauritania.

2. Calls upon the international community to support the commitment of the Mauritanian authorities in setting up the necessary reforms to ensure the continuity of the Pilot Project activities;

3. Encourages the State Party to integrate these actions into the overall reforms being instituted to lead the transformation of the Mauritanian society, and in particular the strategy for poverty alleviation adopted by the Mauritanian Government;

4. Invites the State Party, following the completion of the organizational audit of the cultural institutions of Mauritania, and in consultation with the World Heritage Centre and the Advisory Bodies, to define and establish the structure of the competent body specialized in management and conservation of World Heritage properties, including the integration of its representatives into the municipalities of the four ancient cities.

1.  Congratulates the State Party for the efforts undertaken for the safeguarding of the exceptional values of the ancient cities, through the integration  of the Pilot Project “Safeguarding and Development of the Mauritanian World Heritage Cities” into the PSVPCM Project,

2.  Calls upon the international community to support the commitment of the Mauritanian authorities in setting up the necessary reforms to ensure the continuity of the Pilot Project activities,

3.  Encourages the State Party to integrate these actions into the overall reforms being instituted by the Mauritanian Government to transform the Mauritanian society, and notably the strategy for poverty alleviation,

4.  Invites the State Party, following the completion of the organizational audit of the cultural institutions of Mauritania, and in consultation with the Centre, to define and establish the structure of the competent body specialized in management and conservation of World Heritage sites, including the integration of its antennae into the municipalities of the four ancient cities. 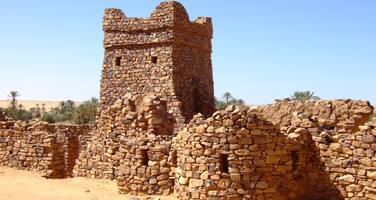