Since its inclusion to the World Heritage List, Robben Island is threatened by tourism pressure due to an increasing number of visitors, placing a high demand on the available resources. The Chairperson of the World Heritage Committee accompanied by the Centre and a representative of the South African Department of Environment and Tourism visited Robben Island in August 2002. During the visit the following observations were made:

·  There is a gradual deterioration of structures and an urgent need for the rehabilitation of 6 or 7 buildings used as ‘singles quarters’ for soldiers during WWII: painting work of the main prison as well as repairs to its roof and broken windows, and for the rehabilitation and protection of the photographs exhibited in the ‘prisoners’ compound which are currently in a poor state;

·   Robben Island is located on the main entry passage of ships into Cape Town, and as a result some of the plastic papers thrown from ships are washed up onto the Island creating a serious garbage problem;

·  While the tour guides who were former prisoners on the Island ably recount the experiences of the prisoners while on the Island, there is need for further training of the guides with regard to the World Heritage Convention, and specifically on the values that enabled the site to be inscribed, so that this information can be transmitted to the visitors;

·  There is no visitor centre on the Island, and this is urgently required as well as interpretation for self-guiding visitors; and

·  Even though Robben Island was listed as World Cultural Heritage, the site displays a large variety of wildlife (such as rabbits, guinea fowl, penguins, antelopes etc) some of which were introduced to the Island and whose populations has increased tremendously, possibly due to lack of ‘natural enemies’ on the Island.

On 13 March 2003, the Director of the World Heritage Centre met with the Director of Cape Town Heritage Trust and a member of the Robben Island Museum Board at UNESCO Headquarters. The Director of Cape Town Heritage Trust confirmed the observed deterioration of the site which she attributed to the massive increase in the number of visitors (estimated at 1000 visitors per day), and a lack of an updated management and conservation plan to meet conservation/restoration and visitor use demands and legislative requirements. She informed the Director of the Centre that the Museum Board is in the process of outlining rehabilitation and a management plan for the site.

In 2002, the Raddison Hotel Group donated an amount of US$25,000 for the improvement of the Robben Island Museum. As part of the Robben Island Museum's research, conservation and exhibition strategies, the Heritage Department plans to bring together ten groups of ex-political prisoners who were imprisoned in Robben Island Maximum Security Prison, to record on video their experiences. These recordings, and others to be made, will be played back in various parts of the prison to visitors, as a memorial to those who were imprisoned there. The funding will be used to edit and refine the recordings and set up a playback system within the prison, which uses the most contemporary technology within the Robben Island Museum Prison setting.

In the exhibition room already available, a collection of historical and cultural artifacts will be displayed, leaflets will be prepared in major local languages, as well as in international languages (e.g. English, French, German) to enhance visitor understanding of the Robben Island World Heritage site.

Robben Island’s state of conservation is a cause for grave concern, and ICOMOS feels that the State Party should be requested to prepare a management plan as soon as possible.  This plan could include a study on the management structure and staffing situation so that the Robben Island Museum (to which the management and conservation of the property has been entrusted), can count on the presence of professionals experienced in the conservation of architectural heritage.  The property has a high number of visitors, and it would be wise to strictly control their number and access to the buildings, particularly the most fragile ones.

2. Commends the State Party for the proactive initiative of undertaking an on-site investigation to assess the state of conservation of the property in February 2003 and for the subsequent adoption of the Conservation Management Plan by the Robben Island Museum Council;

4. Encourages the State Party to continue its efforts towards establishing a plan for the rehabilitation and for the integrated management of the property, which should take into consideration a programme for systematic monitoring;

5. Requests the World Heritage Centre, ICOMOS, ICCROM and IUCN to undertake a mission to Robben Island to ascertain the state of conservation of the property, including the status of the wildlife populations, and to prepare an information document with a proposed rehabilitation programme in order that the World Heritage Committee can examine the state of conservation of the property at its 28th session in 2004;

6. Further suggests that if possible the above-mentioned mission be undertaken before or after the World Parks Congress to be held in Durban, South Africa, in September 2003, and include members of the World Heritage Centre, IUCN and ICOMOS who will be attending the Congress.

2. Welcomes the Centre’s efforts in mobilizing extrabudgetary resources from industries that benefit from World Heritage sites,

3. Encourages the State Party to continue its efforts towards establishing a plan for the rehabilitation and for the integrated management of the site, which should take into consideration a programme for systematic monitoring,

4. Requests the World Heritage Centre, ICOMOS and IUCN to undertake a mission to Robben Island to ascertain the state of conservation of the site, including the status of the wildlife populations, and to prepare an information document with a proposed rehabilitation programme for the consideration of the Committee at its 28th session (June 2004). 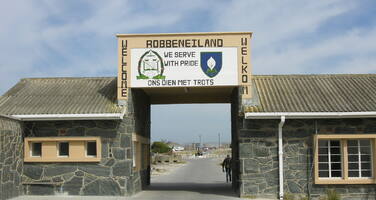