In responding to Decision 26 COM 21 (b) 30, the State Party provided the following new information in a letter dated 31 January 2003 that was subsequently transmitted by the World Heritage Centre to ICOMOS and IUCN:

The mining company Energy Resources of Australia (ERA) will develop an Environmental Management System (EMS) certified to meet ISO14001 (an international standard of excellence for environmental procedures and systems). ERA will develop the EMS in consultation with regulators and Aboriginal representatives and aims to be compliant with ISO14001 by July 2003 and certified by 2005.

In September 2002, the Supervising Scientist released a report into allegations by a former employee of deficiencies in management at the Ranger uranium mine between 1996 and 1998. The overall conclusion of the report was that, apart from a previously reported breach of the Ranger Authorization in December 1997, no evidence had been found that ERA has operated otherwise than in accordance with its Authorization and the Commonwealth's Environmental Requirement. The report is available at http://www.ea.gov.au/ssd/publications/ssr/ 171.html

The Senate Environment, Communications, Information Technology and the Arts References Committee was due to report on the Inquiry into Environmental Regulation of Uranium Mining by March 2003. The submissions made to the Inquiry are available at http://www.aph.gov.au/ senate/committee/ecita_ctte/uranium/submissions/sublist.htm and the transcripts at http://www.aph.gov.au/hansard/ senate/commttee/s-ecita/htm. The State Party has indicated that they will report to the Committee on the outcomes of the Inquiry relevant to any of Australia's World Heritage properties at the 27th session of the World Heritage Committee.

The Alligator Rivers Region Technical Committee (ARRTC) last met in September 2002 to examine issues such as the research on programmes relating to monitoring and assessment, water management and landscape monitoring. ARRTC gave its endorsement to the current phase of the landscape monitoring programme being developed by the Supervising Scientist in response to the recommendation of the International Scientific Panel of the International Council for Science (ICSU). In addition, ARRTC assessed the Supervising Scientist's routine monitoring programme as being current best national and international practice. In August 2002, the Minister for the Environment and Heritage wrote to six environmental NGOs seeking up to two nominations from each organization for consideration for appointment to the ARRTC. The National Environmental Consultative Forum responded to this request, however, only one nomination was provided. The State Party has indicated that it will report on any new information on this matter at the 27th session of the World Heritage Committee.

The State Party has indicated that it will report to the Committee on progress concerning cultural heritage protection and management issues at the 27th session of the World Heritage Committee.

The Indigenous Health Education Project (IHEP) at Jabiru Area School is continuing to achieve positive outcomes for indigenous students in the Kakadu region.

On 15 April 2003, the Centre received a report from a group of Australian environmental NGOs on the state of conservation of Kakadu Natioanl Park. The NGOs referred to the following recent developments and commented that the impacts of uranium mining operations and the potential for further large scale industrial development at the Jabiluka site are having an adverse impact on Kakadu:

ii) No clear indication by the mining company Rio Tinto/Energy Resources of Australia to rehabilitate the Jabiluka mine site;

iii) Formal resolutions from the Australian Chapter of the International Union for the Conservation of Nature calling for the rehabilitation of the Jabiluka mine site and the appointment of an agreed environmental NGO representative on ARRTC;

iv) Continuing serious deficiencies in the four priority issue areas identified by IUCN and no further articulation or detail by either the State Party or the mining company as to how and when promised improvements to the environmental management regime will be realised;

v) Continuing erosion of environmental NGO and wider stakeholder confidence in the adequacy and effectiveness of current monitoring and protection regimes;

vii) Detailed evidence and testimony on environmental and cultural impacts received as part of a continuing Australian Senate Inquiry into the effectiveness of existing regulatory frameworks.

The report of the environmental NGOs was transmitted to the State Party with a request for response by 31 May 2003. The State Party response will be sent to IUCN and ICOMOS for information and review and will be reported orally by the Observer of Australia at the 27th session of the Committee.

No comments were provided by IUCN at the time of preparation of the document.

No comments were provided by ICOMOS at the time of preparation of the document.

1. Notes the new information provided by the State Party;

2. Urges the State Party to proceed with the appointment of a non-governmental organization (NGO) representative to the Alligator Rivers Region Technical Committee (ARRTC);

3. Requests that the State Party provide a report on:

(b) the ARRTC's continuing monitoring and review of water management and other environmental issues at Jabiluka and Ranger,

(c) consultation with the Traditional Owners of Kakadu on cultural heritage management and protection.n;

1. Notes the new information provided by the State Party,

2. Requests that the State Party provide a report on (i) progress on compliance with ISO14001; (ii) the appointment of NGO representatives to the Alligator Rivers Region Technical Committee (ARRTC); (iii) the ARRTC's continuing monitoring and review of water management and other environmental issues at Jabiluka and Ranger, and (iv) consultation with the Traditional Owners of Kakadu on cultural heritage management and protection.  The report should be provided by 1 February 2004 for review by its 28th session in June/July 2004. 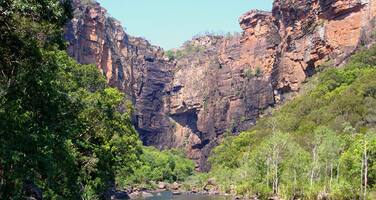