The State Party provided an up-date in response to the Committee’s request, and informed the Centre of the following: The Henderson Management Plan has been in existence for a number of years but has yet to be finalised. The State Party informed the Centre that no significant work has been carried out on the Henderson Management Plan since the last meeting of the World Heritage Committee. This is largely due to difficulties in getting to the Island and other priorities within the community. Preparation of a final version of the Management Plan has been agreed with the Island Council and community.

Until the end of 2002, Pitcairn enjoyed an irregular but fixed-date service from P&O container ships. Unfortunately though, sailings never seemed to coincide with the availability of the environmentalists responsible for finalising the Management Plan. The container ship service has now stopped and has been replaced by a charter service, which has been set up to transport official visitors to and from the Island.

1. Recalls that the State Party was to implement, as a matter of urgency, the 1995 Management Plan for this property, with provision for its on-going improvement (based on input received and lessons learnt);

1. Recalls that the State Party was to implement, as a matter of urgency, the 1995 Management Plan for this site, with provision for its on-going improvement (based on input received and lessons learnt,

2. Requests the State Party to prepare an update report by 1 February 2004 for review by its 28th session. 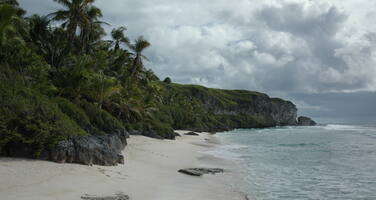