Other UNESCO Sector or Field Office:

Following the decision of the World Heritage Committee at its 26th session (June 2002), the Government of Cambodia submitted on 13 March 2003, a progress report with technical details on all activities carried out between 1992 and 2002, together with the National Periodic Report to be reviewed within the framework of the Regional Periodic Reporting Exercise.

All information has been transmitted to ICOMOS for review and information. The following conservation activities of the Authority for the Protection of the Site and Development of the Region of Angkor (APSARA) and other international teams between 1992 and 2002 were presented:

A. Conservation activities carried out by APSARA:

Maintenance and cleaning: Two maintenance teams were established for the site. One team is composed of 300 staff members and is responsible for the cleaning of the surfaces of the monuments and the immediate surroundings. Another team composed of 20 people, is responsible for the cleaning of the buildings, removing plants, moss and parasites growing on the monument structures. A Monuments Conservation Service has been created which is responsible for: the maintenance of monuments and important restoration work; implementation of projects, and follow-up and monitoring of the international operator’s work.

Security, prevention and protection: Since 1999, Angkor Vat has been protected by a security team. Its staff has increased from 16 to 610 persons at present. The on-site protection, prevention and site surveillance has been secured by the creation of a special police commissariat for heritage in October 1997 employing 520 police officers. Currently, it has a total staff of 250.

A total amount of US$ 4,340,659 was provided by UNESCO/Japan Trust Funds for the Conservation of the Royal Plaza (Prasat Suor Prat and its terrace), the Bayon (elaboration of a Master Plan) and Angkor Wat (Northern library inside the outermost enclosure) - Phase III –2003-2005. In the framework of both long-term and short-term training programmes, training activities have continually been carried out by the Japanese Government Team for Safeguarding Angkor.

Funds were provided from Japan Funds-In-Trust (US$ 27,459) and French Funds-in-Trust (45,682 Euros) to support the International Co-ordination Committee for the Safeguarding and the Development of the Historic Site of Angkor (ICC).

The production of a documentary film and publication on 10 years of international assistance for the safeguarding and development of the historic site of Angkor was co-financed by Japanese and French Funds-In-Trust, which will be presented during the Inter-governmental Conference to be held in Paris in November 2003.

The Italian Funds-In-Trust (US$ 227,469) supported the restoration of the Pre Rup Temple – Phase III – 2003-2004. The project aims to complete the restoration of the most badly damaged towers of the temple and to gather information on the state of conservation of the other building structures. On-site training will be organized to transfer the acquired experiences to the local technicians involved in the project. Phase III constitutes the final phase of this project.

The French Tour Operator, ACCOR Group, provided support for a project on the consolidation and development of Bat Chum Temple in 2003 to consolidate the three towers and to clean the surrounding moats of the Temple. This project is being implemented by APSARA.

As stated in the National Periodic Report submitted by the Government of Cambodia, the monuments of Angkor are in varying states of conservation. Since inscription on the World Heritage List and the List of World Heritage in Danger in 1992, more than 20 major conservation and restoration projects have been undertaken at the site. However, due to the vastness of the property, there are still many monuments in need of conservation attention.

Meanwhile, the property attracts a growing number of visitors. Between 2001-2002, international tourists at the site increased by 29% from 208,472 to 269,155. To enable the local communities to absorb such rapid social changes and to draw out positive benefits from the tourism industry while simultaneously conserve the values of the property, a project entitled “Training of APSARA cultural mediators” has been organized by UNESCO and APSARA in close co-operation with the Ministry of Tourism.

1. Commends the Government of Cambodia and particularly the Authority for the Protection of the Site and Development of the Region of Angkor (APSARA) for submitting a detailed report to the Committee on the major conservation activities carried out at the property with the generous technical and financial contributions from Japan, France, Italy, Germany, United States of America, Switzerland, China, Indonesia, Hungary, India and private groups and foundations such as ACCOR and the World Monument Fund;

(a) Continue the implementation of the existing management plan as appropriate;

(b) Review the management plan to ensure that tourism development is adequately controlled to mitigate negative impact upon the outstanding universal value of the property and the local communities;

(c) Reinforce on-site legal provisions for heritage protection together with their administrative measures for implementation of such provisions;

3. Recommends to the State Party the strengthening of co-operation between APSARA and the provincial authorities to improve preventive measures against on-site looting and theft;

4. Requests the UNESCO Secretariat, the Advisory Bodies and other international partners to continue to support the national and local authorities in implementing the above-mentioned action by providing appropriate international assistance;

6. Decides to retain the property on the List of World Heritage in Danger.

1. Commends the Government of Cambodia and particularly the Authority for the Protection of the Site and Development of the Region of Angkor (APSARA) for submitting a detailed report to the Committee on the major conservation activities carried out at the site with the generous technical and financial contributions from Japan, France, Italy, Germany, USA, Switzerland, China, Indonesia, Hungary, India and private groups such as ACCOR;

2. Encourages APSARA to: a. Continue the implementation of the existing management plans as appropriate, and harmonize and revise these plans to include adequate measures to control tourism development to mitigate negative impact upon the heritage values (tangible and intangible) and the local communities; b. Reinforce on-site legal provisions for heritage protection together with their administrative measures for implementation;

3. Recommends that the State Party strengthens co-operation between APSARA and the provincial authorities to improve preventive measures against on-site looting and theft;

4. Requests UNESCO, the Advisory Bodies and other international partners to continue co-operation with the national and local authorities to implement the above-mentioned action by providing appropriate international assistance;

5. Requests the State Party to provide a report on the state of conservation of the property to be examined by the 28th session of the World Heritage Committee;

6. Decides to retain the site on the List of World Heritage in Danger. 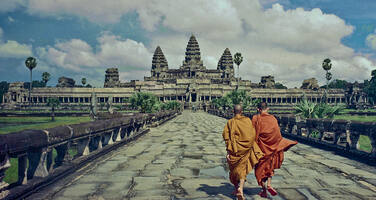