1. Proposed expansion of the military airport: The national authorities responsible for the protection of the site through the Sri Lankan Ambassador to UNESCO informed the World Heritage Centre in February 2001, on the plans for the construction of a military airport within 2 km of Sigiriya. The authorities stated that the airport, if and when constructed, will negatively impact upon the site through:
2. Lack of clear demarcation of the core and buffer zones of the site.

The Bureau expresses appreciation for the rapid deployment of the Reactive Monitoring mission to Sigiriya. While noting the national security concerns of the Government of Sri Lanka, the Bureau requests the State Party to reconsider the proposed expansion of the Sigiriya airstrip and to provide a report on decisions taken by the Government in this regard, by 15 September 2001, to the Secretariat for the consideration of the Committee at its twenty-fifth session.

Although the State Party was requested by the Bureau at its twenty-fifth session to reconsider the proposed expansion of the Sigiriya airport and to provide a report on decisions taken by the Government in this regard by 15 September 2001, the Centre was informed on 20 September 2001 by the Director-General of Archaeology that the final decision was pending, in light of the recent bombing of the Colombo International Airport and national security concerns.

Further information is expected before the twenty-fifth extraordinary session of the Bureau.

V.236     The Bureau noted the information received from the State Party in February 2001 concerning proposed plans for the expansion of a military airport within 2 km of Sigiriya. The national authorities had stated that the airport, if and when constructed, would negatively impact upon the site through:

V.237     The Centre informed the Bureau of the findings of the Reactive Monitoring Mission to the site in March 2001, which had been urgently organised at the request of the national authorities. The mission undertaken by the Deputy Director of the Centre together with an international airport planning engineer seconded from the Aeroports de Paris under the France-UNESCO Agreement, held detailed discussions with the national and military officials concerned. ICOMOS had been invited to participate but was unable to do so due to the very short notice of the mission. However, ICOMOS-Sri Lanka was consulted during the mission.

V.238     The Bureau noted with deep concern, the findings of the UNESCO Reactive Monitoring Mission, which concluded that:

(a)      the proposed extension of the Sigiriya airport to serve as the principal base for fighter jets would undermine the character of the World Heritage site, notably due to security risks of enemy attack and air and noise pollution which will not only impact negatively on the fragile structure of the monuments and the wall paintings, but also on the flora and fauna of the natural reserves located along the flight path, and;

(b)      the technical study prepared by the airport planner recommended that the national authorities consider the expansion of the Hingurakgoda airstrip which is in better condition, hence less costly to upgrade and more appropriate for eventual use as a commercial airport.

V.239     The Bureau expressed appreciation for the rapid deployment of the Reactive Monitoring Mission to Sigiriya. While noting the national security concerns of the Government of Sri Lanka, the Bureau requested the State Party to reconsider the proposed expansion of the Sigiriya airport and to provide a report on decisions taken by the Government in this regard, by 15 September 2001, to the Secretariat for consideration by the Committee at its twenty-fifth session.

V.240     The Observer of Sri Lanka expressed his Government’s deep gratitude to the Director and Deputy Director of the World Heritage Centre, and the French Government, for swiftly responding to the request for an urgent mission to be undertaken to examine the proposed plans for expanding the military airport of Sigiriya. The Bureau was informed that the Recommendations of the UNESCO Mission have been placed before the Government for its consideration. 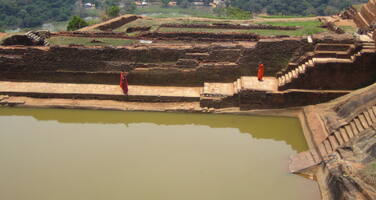