New information: The World Heritage Centre was informed of serious damages that were caused in the beginning of April 2001 to the temple of Mnajdra, one of the Megalithic Temples of Malta. The Government of Malta submitted a report concerning the damages to the site. This report was sent to ICOMOS for further advice. In order to prepare an assessment of the damages to the site, ICOMOS will undertake a mission to the site from 11 to 12 May 2001.

The Bureau may wish to examine the information that will be available at the time of its session and take the appropriate decision thereupon.

The Bureau at its twenty-fifth session requested the State Party to inform the Committee on progress of actions undertaken following damage caused by vandalism that occurred in April 2001. At the time of the preparation of this document, the requested information had not been received by the Secretariat.

V.261     The Secretariat informed the Bureau that an ICOMOS mission visited the site on 11 and 12 May 2001 to evaluate the damage caused by acts of vandalism that occurred between 12 and 13 April 2001 at Mnajdra, a part of the World Heritage site.

V.262     During his intervention, the ICOMOS Representative indicated that this report comprises several recommendations and in particular:

V.263     Furthermore, in the report ICOMOS congratulates the State Party for its swift and efficient action in response to these events as well as for actions taken in the framework of the updating of the legal, administrative and scientific structures of the management programme for cultural heritage.

V.264     However, during his intervention, the ICOMOS Representative underlined that, already, during an expert meeting held in 1999, the issue of strengthening security at the site had been discussed.  In conclusion, he mentioned that during his recent mission to the site, he had met with the Minister for Culture who had assured him of the concern of his Government with regard to all these questions.

V.265     The Observer of Malta thanked the Centre and UNESCO for the interest shown following these events.  He indicated that this incident had given rise to an important debate in Parliament and public opinion and that major campaigns for the collection of funds had been initiated to assist in the restoration of the site.  The Observer of Malta furthermore informed the Bureau that immediate action had been taken by the Government on the days following the acts of vandalism.  He emphasised that significant efforts had been made to rehabilitate the site to its former state, that security at the site had been greatly strengthened, notably through the installation of projectors to illuminate the site at night and that they were linked by radio 24h/24h to the police post.  Moreover, he indicated that the fences surrounding the site were being reinforced.  He also mentioned to the Bureau that among the actions to improve the management and the protection of Maltese cultural heritage, a draft law would be submitted very shortly to Parliament.   In concluding, the Observer of Malta notified that an investigation to discover the culprits was underway.

V.266     The Rapporteur informed the Bureau that during a visit to Malta following the events, he had noted that the security at the site was considerably strengthened.  He did however underline that the general state of conservation of the site remained an issue of concern and that this problem should be studied, in particular the problem of erosion.

V.267     The Bureau took note of the information provided by the Observer of Malta and congratulated the State Party for its rapid and efficient reaction to the events as well as for the strengthening of security at the site and invited the State Party to inform the Committee on the progress of these actions.  The Bureau warmly welcomed the State Party's undertaking to review and update the legal, administrative and scientific structure of its management programme for cultural heritage.  The Bureau moreover, indicated its firm wish that close co-operation between the World Heritage Centre, ICOMOS and the State Party be established, in particular with regard to the evaluation of measures already undertaken for the rehabilitation and conservation of the site as well as for future ones.

The Bureau may wish to examine additional information from the State Party that may be available at the time of its session and may wish to submit a text for examination by the Committee. 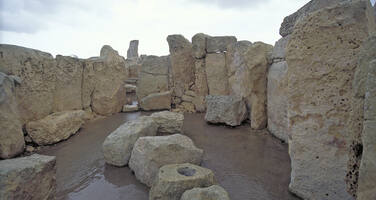