The Bureau, at its twenty-fourth extraordinary session, requested the German authorities to formulate and implement planning regulations that will ensure the long-term preservation of the archaeological remains in this area. At the request of the Minister of Culture of the Land Rhenanie-Palatinat, ICOMOS undertook a mission to the site on 23 – 24 September 2001 to study the situation regarding developments in the neighbourhood of the Amphitheatre, and also to report on the state of conservation of the other monuments inscribed on the World Heritage List. The ICOMOS expert noted that the Roman Amphitheatre is well conserved, however, there is a conservation problem notably connected with the water table, concerning the important Roman remains revealed at the site of the former brewery. Some degradation and weathering were noted at the Barbara Baths, the Porta Nigra and the Imperial Baths. In general, the ICOMOS mission observed deficiencies in staffing, a shortage of maintenance personnel who could monitor the state of conservation of structures as well as the inadequate on-site interpretation. Furthermore, the ICOMOS expert has identified two potential extensions to the existing site which are: the Viehmarkt, where extensive rescue excavations have revealed substantial remains of a large Roman thermal establishment and the Simeonstift, the history and location of which are intimately linked to those of the Porta Nigra. The ICOMOS mission recommends that:

1.  A major project for the study and re-excavation of the Barbarathermen, followed by scientific conservation and the implementation of a management plan, should be initiated without delay;

2.  There should be a scientific study of the rate and nature of degradation of the stones of the Porta Negra, followed by the implementation of appropriate conservation measures;

3.  Serious consideration should be given to the appointment of additional security and maintenance personnel at the archaeological sites;

4.  Projects should be undertaken to improve the interpretation and signage at the archaeological sites;

“The Bureau takes note of the ICOMOS mission report and asks the German authorities to urgently take all the necessary steps to implement a management plan for the site. Furthermore, scientific studies on the rate and nature of degradation as well as conservation measures should be initiated. The Bureau further urges the German authorities to improve interpretation and signage at the site as stipulated in Article 5 (d) of the Convention and requests the preparation of a progress report on all the above to be prepared by 15 January 2003, in time for the twenty-seventh session of the Bureau in April 2003.” 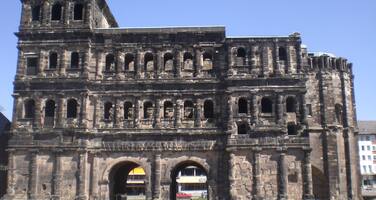