The eruption of Mt. Ruapehu in 1995/1996 caused a large build-up of ash that blocked the outlet of Crater Lake.  There is concern that when the Lake refills, a rapid collapse of the ash dam could occur followed by a major lahar (ash flow).  Options to manage this risk need to take account of the protection of both the natural and the cultural values, as interference with the summit area and Crater Lake has implications for the protection of spiritual, traditional and cultural values to the Maori people.

A new report on the management of the ash build-up at Crater Lake refers to a Department of Conservation environmental risk assessment for the mitigation of the hazards from Crater Lake at Mt. Ruapehu.  The report notes that following extensive and wide ranging consultation and reviews of various aspects of the Assessment of Environmental Effects (AEE) the Conservation Minister has approved the installation of an early warning system and construction of a bund to prevent the lahar overflowing into the Tongariro River Catchment from the Whangaehu Valley.  The Minister is currently preparing a final decision on whether engineering works at Crater Lake are a necessary measure for the mitigation of the lahar hazard.

The report expresses concerns that the proposed engineering, in the form of major earthworks (including the possible construction of an artificial outlet for the Crater Lake), is an over-reaction to the degree of threat and will significantly harm both the cultural and natural values associated with the Crater rim.  In the World Heritage nomination of Tongariro National Park, the Crater Lake on Mt Ruapehu was specifically identified as one of the three vulcanological features that justified this status.

The report also expresses concern that proposed engineering works might establish a dangerous precedent within Tongariro and other national parks. Eruptions within the Crater Lake are a regular and ongoing natural feature. Continual follow-up engineering works would be required following subsequent eruptions. Furthermore, the mountains of Tongariro National Park are sacred to the Maori people of New Zealand.  The report comments that it is more consistent with National Park legislation and principles to allow natural process to function and to develop and implement measures that will protect both public safety and infrastructure. 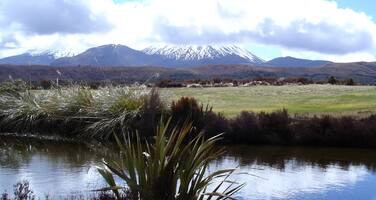