As requested by the twenty-fourth extraordinary session of the Bureau in November 2000, the Ha Long Bay Management Department (HLBMD) provided the sixth annual progress report on the conservation, management and promotion of the Ha Long Bay World Heritage Area. IUCN has reviewed the report and has expressed broad support for the efforts of the HLBMD to manage this extremely complex World Heritage site located in an intensive economic development zone.

IUCN has been informed that the project proposal for the Institutional Capacity Building of the Halong Bay Management Department, prepared by IUCN-Vietnam, HLBMD and the Quang Ninh Provincial Authorities, has been widely circulated and finalised in close collaboration with relevant institutions and the province. The proposal is currently being shared with potential donors. Furthermore, HLBMD, IUCN-Vietnam and UNESCO Vietnam are developing a proposal with several components: a comprehensive survey and mapping of all significant caves in the Halong Bay World Heritage area; an assessment of biodiversity values (both terrestrial and marine) of Halong Bay and surrounding hinterland; and an evaluation of cultural values of the site. These will provide the basis forthe future possible re-nomination of the site under biodiversity value criteria and, perhaps, as a mixed World Heritage site.

The UNESCO Ha Long Bay Eco-Museum Feasibility Project, financed by UNDP has been completed and a final 135-page report on the feasibility study and a video have been transmitted to the Centre by the UNESCO Office in Vietnam on 17 October 2001. IUCN served as a member of the Steering Committee of this Project. Discussions have been held on collaboration between the Eco-Museum project and the Institutional Capacity Building project.  The final proposal of the Ha Long Bay Eco-Museum Feasibility Project, envisages to implement the following main activities. The project has proposed the development of an “Ecomuseum Hub” in the vicinity of Ha Long Bay and a variety of interpretation packages based on several themes identified in the study.

The feasibility study follow up places strong emphasis on the establishment of a project team of Vietnamese staff of the Ha Long Bay Management Department supported by two international facilitators. Intensive capacity building and skills transfer, particularly in the fields of planning, data collection and integrated interpretative management of the area are proposed. A comprehensive analysis to develop strategic partnerships between the Ecomuseum and key stakeholders has been undertaken and has identified a number of thematic areas for collaboration. For example, a theme on the fishing traditions of Ha Long will directly involve floating fishing villages, terrestrial fishing communities, boat builders and major institutions such as the Viet Nam Institute of Oceanography, the Institute of Marine Products and local authority agencies such as the provincial Fisheries Department. An outline for an Interpretative Management Plan by HLBMD will include a number of interpretative themes, at least two of which are targeting the fishing industry.

IUCN has observed the HLBMD report states that tourism has increased by 135% between 1997 and 2000 and is a critical management issue at this site. IUCN has expressed satisfaction with the fact that the direct management and control of the caves has been brought under the authority of HLBMD, and hopes this will ensure appropriate measures to present the caves, control tourism and minimise impacts. The Feasibility Study’s effort to propose a “Ecomuseum Hub” and an Interpretative Management Plan aim to spread the visitor resources in and outside of Ha Long Bay and thereby support the intensity of visitation to the World Heritage site without reducing the number of tourists visiting the broader region. The feasibility study estimates that total cost of the development of the “Ecomuseum Hub” and other interpretation theme products is likely to cost US$ 17 million over a 4-year period. The Quang Ninh Province has committed US$ 3 million and intends to seek other funds from external sources.

During a visit to Japan in early October 2001, a representative from the Centre met with officials of the Japan International Co-operation Agency (JICA). These officials confirmed that the Environmental Management of Ha Long Bay continues to be one of the priority projects of JICA and that discussions with the Government of Vietnam are underway in order to implement the Environmental Management Plan as soon as possible.

“The Bureau commends HLBMD efforts to conserve the site and acknowledge efforts of the State Party to support the development of a range of projects to address management issues at the site.  Given the considerable international interest in the site, the Bureau urges the HLBMD to continue and strengthen its efforts to co-ordinate projects in order to ensure optimal use of resources and skills available via HLBMD’s association with IUCN and UNESCO Offices in Vietnam and other partners. The Bureau reiterates the recommendation made at its twenty-fourth extraordinary session regarding the early implementation of the recommendations of the JICA/Government of Vietnam Environmental Management Plan for Ha Long Bay and invites the State Party to submit by 1 February 2002 a progress report on what has been achieved in this regard for consideration of the twenty-sixth session of the Bureau in April 2002” 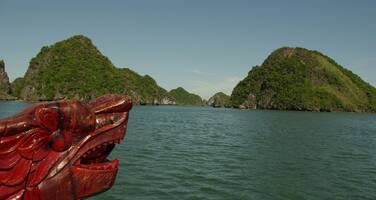