New information: Following the request of the Bureau at its twenty-third extraordinary session, a UNESCO reactive monitoring mission was undertaken in April 2000 by two international experts.  They held further consultations with the authorities concerned for the restoration of the Maya Devi Temple, and examined the management and conservation needs of the fragile archaeological site. The UNESCO reactive monitoring mission recommended that:

At the time of the preparation of this working document, an ICOMOS expert reactive monitoring mission to follow-up on the findings of the UNESCO mission was being organized. The findings of the ICOMOS mission will also be presented to the Bureau at its twenty-fourth session.

The Bureau may wish to examine further information at the time of its session and adopt a decision thereafter.

The Centre received an international assistance request from the Nepalese authorities for the organisation of the International Technical Meeting to discuss and initiate alternative draft conceptual designs for rehabilitating the Maya Devi Temple. The Chairperson of the Committee approved the request, and the World Heritage Centre is organising this meeting, currently scheduled for April 2001, the earliest possible dates for the appropriate international experts to travel together to the site.

Following the request of the Bureau at its twenty-third extraordinary session, the World Heritage Centre organized a UNESCO reactive monitoring mission to Lumbini to examine the state of conservation of the Maya Devi Temple archaeological remains and to undertake further consultations with the Nepalese authorities concerning the proposals under consideration for the rehabilitation of the Maya Devi Temple.

The Bureau was informed that the UNESCO mission undertaken in April 2000 recommended the following:

(a)     The four draft conceptual designs for the construction of a “new” Maya Devi Temple on top of the archaeological remains of the Temple should be rejected, as such a construction, which would last a maximum of 100 years, would result in significant long-term damage to the unique site which is over 2000 years old;

(b)     Taking into consideration the sensitive religious, archaeological and political nature of the property, alternative designs for the Temple should be further discussed at an International Technical Meeting, based on the concepts of non-intrusion, reversibility, shelter, visibility, focus, access, worship, authentic materials and integration with the Tange Master Plan, to be organized as soon as possible;

(c)     In anticipation of further discussions on alternative designs for the rehabilitation of the Maya Devi Temple, and in the absence of a regular monitoring system, the national authorities are recommended to put into place basic environment monitoring mechanisms of the Temple;

(d)     In the absence of a strategic plan for the on-going management and conservation of the site, the development of a “minor plan” for enhanced preservation and presentation of the Sacred Garden was urged to address the following recommendations: (i)  a geophysical survey is recommended in order to establish the full delineation of the site;  (ii)  the adoption and implementation of a systematic conservation strategy for addressing the deterioration of the archaeological structures;  (iii) as the site has been developed resulting in incoherent landscaping, it is recommended that the authorities adopt a unified approach to connect the site to its surrounding to ensure that authentic materials are used with reference to the site’s historical and archaeological nature;  (iv) as visitor numbers are unknown, it is recommended that recording of visitor numbers be conducted;  (v) as ritual practices have resulted in damage to the site in the past, the creation of a principle archaeological circuit and a principle ritual circuit with zones for ritual practices is recommended;  (vi)  as the Tange Plan is still incomplete, the State Party is recommended to regroup the visitor services behind a distinct entry zone to be established, and to investigate the improvement of the drainage system.

On 19 June 2000, the Centre received a technical co-operation request for supporting the organization of the recommended International Technical Meeting. The request has been evaluated by ICOMOS, which fully supports the well-formulated request. The Bureau was informed that the request would be processed swiftly following normal procedures. The Centre also reported that information from the UNESCO Kathmandu Office had been received concerning the Government’s initiation of the basic monitoring of the Maya Devi Temple environment through temperature and humidity fluxation measurement.

To follow-up on the findings of the UNESCO mission and following the request of the Bureau, an ICOMOS reactive monitoring mission was organized between 19-23 June 2000. The ICOMOS mission, underlining the challenges faced in safeguarding the World Heritage values of this fragile archaeological site which is also a place of pilgrimage and worship, informed the Bureau that the interests of conservation and religious devotion could be contradictory. The Bureau was informed that, despite assurances from the State Party at the time of inscription that a conservation plan would be developed for the site, such plan had not yet been elaborated to date.

The Bureau examined the findings and recommendations of the UNESCO reactive monitoring mission undertaken by two international experts in April 2000 and the ICOMOS Mission of June 2000. The Bureau recommended HMG of Nepal to consider adopting the UNESCO Mission’s Recommendations for Enhanced Management and Conservation of the site and report to the twenty-fourth extraordinary session of the Bureau on any further measures taken to enhance management and conservation of the site.

The Bureau expressed its appreciation to HMG of Nepal for adopting the UNESCO Mission’s Recommendations for Immediate Actions by commencing regular monitoring of the Maya Devi Temple’s environment and by submitting a Technical Co-operation request for supporting the organization of an International Technical Meeting to discuss and initiate alternative draft conceptual designs for rehabilitating the Maya Devi Temple.

In view of the absence of a conservation or management plan for safeguarding the World Heritage values of the Lumbini World Heritage site, the Bureau requested HMG of Nepal to urgently develop a Management Plan, taking into consideration the UNESCO and ICOMOS Mission Recommendations.

Finally, the Bureau requested the World Heritage Centre to continue to assist HMG of Nepal in organizing the International Technical Meeting as early as possible, together with the UNESCO Kathmandu Office, and to report on the progress made to the twenty-fourth extraordinary session of the Bureau. 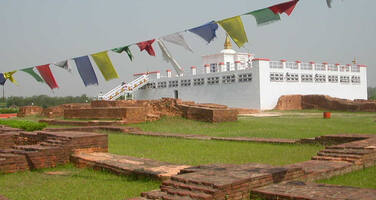