New information: At the time of the preparation of this working document, no information had been received concerning the structural study implemented with financial assistance from the World Heritage Fund emergency assistance reserve, made available in 1998 from the Government of India. Following the request of the Committee, the World Heritage Centre and ICOMOS arranged for a reactive monitoring mission to the site in February 2000, undertaken by an ICOMOS international expert. The mission reviewed the work carried out with the 1997 emergency assistance fund, and examined the progress made in the national actions undertaken to halt the deterioration of the stone structure and structural engineering problems, which are reportedly serious. The findings and recommendations of the ICOMOS mission will be reported at the time of the twenty-fourth session.

The Bureau may wish to formulate a decision upon examining further information to be presented by the Secretariat and ICOMOS at the twenty-fourth session of the Bureau.

The Bureau, at its twenty-fourth session, examined the findings and recommendations of the ICOMOS monitoring mission to the site undertaken in February 2000. In order to mitigate potential threats caused by illegal encroachment and ad-hoc construction in the areas surrounding the site, the Bureau requested the authorities concerned to urgently prepare a Comprehensive Development Plan and requested the Secretariat to assist the State Party in mobilising international technical expertise and co-operation as required. The Bureau further requested the Government of India to report to the twenty-fourth extraordinary session of the Bureau on the progress made in preparing this Plan but at the time of drafting this working document, further information has not been received by the Secretariat. The Centre has been informed by the Permanent Delegation of India to UNESCO that information will be made available prior to the twenty-fourth extraordinary session of the Bureau.

The Bureau was informed that since the preparation of the Working Document, the World Heritage Centre had still not received information concerning the structural study being implemented with financial assistance from the World Heritage Fund Emergency Assistance, made available in 1998 to the Archaeological Survey of India. The Centre reported that the Activity Financing Contract for this emergency structural survey has become null and non-disbursed money has been liquidated following UNESCO Administrative Regulations.

In February 2000, a reactive monitoring mission was undertaken by an ICOMOS expert, who examined the state of conservation of the site, reviewed the work carried out with the Emergency Assistance contribution from the World Heritage Fund, and held discussions with the Indian authorities concerning their intention to nominate the site as World Heritage in Danger.

The ICOMOS Mission found that there was no immediate threat to the monument due to structural instability. Although long term effects of the loosening of stone parts and water penetration need examination, the stones were found to be in good condition. The recent cyclone had extensively damaged the green belt of the site, which acted as a buffer zone as well as a screen against possible salt infiltration from the sea breeze. However, ICOMOS underlined the importance of carrying out further analysis of the structures to develop a strategy for removing the sand from within the Sun Temple.

The ICOMOS Mission witnessed ad-hoc development activities and illegal encroachment impacting negatively on the areas surrounding the site, and recommended that urgent actions be taken to ensure adequate building control and the development of a Comprehensive Development Plan. Enhanced site interpretation was strongly encouraged through the presentation of similar important architectural complexes in the nearby region which attest to the unique architectural character, lost within the Konarak Sun Temple complex. Although the ICOMOS Mission recommended that the site should not be inscribed on the List of World Heritage in Danger, as the property is not threatened by serious and specific danger at this moment, implementation of previous recommendations of UNESCO Missions (1981, 1987) for enhanced protection and presentation of the site was urged.

The Observer of India informed the Bureau that the national authorities concerned were fully aware of the responsibilities of the State Party in adhering to the World Heritage Convention, and were committed to taking necessary measures to ensure the safeguarding and appropriate presentation of the World Heritage values of the Konarak site. The Observer expressed his appreciation to the World Heritage Centre and ICOMOS for organizing the reactive monitoring mission, and informed the Bureau that the ICOMOS recommendations would be carefully examined and considered for implementation.

The Bureau examined the findings and recommendations of the ICOMOS reactive monitoring mission to the Sun Temple of Konarak, undertaken in February 2000. The Bureau, taking note of the efforts made by the Indian authorities to undertake a structural analysis utilizing the World Heritage Fund, requested the Secretariat to assist the authorities in formulating a technical co-operation request for completing the structural survey for developing a strategy for removing the sand within the Sun Temple.

The Bureau, encouraging the Indian authorities to continue its regular maintenance programme, invited the authorities to periodically submit a monitoring report concerning the state of conservation of the site, following the format adopted by the World Heritage Committee. Moreover, the Bureau invited the Indian authorities to consider nominating, as a serial nomination, other well preserved temple complexes in the Bhubaneswar Region, which illustrate the unique architectural characters which Konarak has lost.

The Bureau may wish to formulate a decision upon examining further information to be presented by the Secretariat at the twenty-fourth extraordinary session of the Bureau. 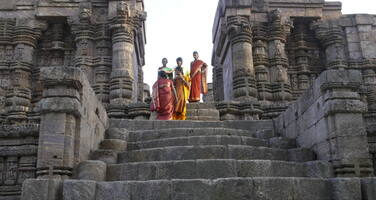