New information: ACIUCN has completed its report on the 'Shark Bay World Heritage Area: Condition, Management and Threats' and made a total of 15 recommendations.  The report was compiled over several months culminating in its adoption by ACIUCN at its 41st Ordinary Meeting, held during 30-31 March 2000. The process involved a questionnaire circulated by ACIUCN to various organisations and individuals and then a series of working group meetings to discuss and agree on the final report.  There has been extensive consultation with a range of organisations, agencies, and individuals involved and interested in the Shark Bay World Heritage Area, including Commonwealth, State and Local Government authorities, conservation groups, members of the Shark Bay Community Consultative and Scientific Advisory Committees, scientists, locals and industry groups.
The overall report (included as WHC-2000/CONF.202/INF.11 to this session of the Bureau, in English only) provides a comprehensive assessment of issues at Shark Bay.  To arrive at a set of more focused recommendations, IUCN undertook a cluster analysis of the 15 recommendations in consultation with members of the working group and ACIUCN.  This analysis identified the following five priority action areas:

1. Overall Management Framework (Recommendations 1 and 15 in the ACIUCN Report)
Shark Bay was inscribed on the World Heritage List in 1991; but there is still no overarching plan with a primary objective of protection of the World Heritage property and to provide an overall management framework for activities within the area. Various planning documents available to the management apply to the property but they do not serve as a substitute for the overarching plan. In this context IUCN recognises that the draft Shark Bay World Heritage Property Strategic Plan is now being finalised for public comment.

ACIUCN recommends that the Shark Bay World Heritage Property Strategic Plan be completed and implemented as a matter of high priority. ACIUCN further recommends that outstanding reserve proposals identified in existing planning documents be implemented as a matter of priority and that appropriate management arrangements with adequate staff and resources be instituted to ensure that the World Heritage values of the property are maintained.

2.Minerals and Petroleum: Exploration and Extraction (Recommendations, 2, 3, 4, 5, 6 and 7 in the ACIUCN Report)
Activities relating to exploration and extraction of mineral and petroleum resources and the production of salt have the potential to impact on the World Heritage values of the property. Issues concerning mineral exploration and extraction are contentious and it was not possible to achieve unanimous agreement with respect to the recommendations adopted in the ACIUCN report. Shell mining and salt extraction were occurring in the site at the time the site was designated World Heritage and the State Party and the Western Australian government agreement to its listing was predicated on their continuation. The Coquina Shell nevertheless is an important feature of the World Heritage area and proposals to expand salt extraction into the current boundaries of the World Heritage area are of concern. ACIUCN takes the policy position that mining and mineral exploration should not take place in IUCN Protected Area Categories I and II. In accordance with the recent position paper of the IUCN World Commission on Protected Areas (WCPA), this policy has been extended to include IUCN Protected Area Categories III and IV, despite the fact that the decision to extend the policy to the latter categories was not unanimously accepted by the membership of IUCN/WCPA. ACIUCN has suggested that the Commonwealth and the State Government report on actions taken to ensure that where such activities occur they do not cause damage to the World Heritage values of the site.
ACIUCN recommends that no such exploration, exploitation and salt production activities should take place where they are likely to cause damage to World Heritage values.

3. Biological Resource Harvest (Recommendations 11, 12, 13 and 14 in the ACIUCN Report)
There are grazing leases in parts of the terrestrial area, aquaculture operations, proposals for further aquaculture developments and a number of fisheries activities in the marine area. The extent to which they are ecologically sustainable and may impact individually or cumulatively on the World Heritage values of the area is not clear.
ACIUCN recommends that management plans be developed and implemented that ensure that any grazing, aquaculture and fisheries activities are ecologically sustainable and not likely, individually or cumulatively, to cause adverse impacts on World Heritage values.

4. Invasive Species (Recommendations 8,10 and 14 in the ACIUCN Report)
Pastoral activities, aquaculture and ballast discharge from ships, current and potential threats of feral animal and exotic plant introductions with consequent impacts pose considerable threats to World Heritage values.
ACIUCN recommends that strategic plans be developed and implemented to eradicate or adequately control feral and exotic species that currently occur and to prevent future entry and establishment of invasive species.

5. Visitor Management (Recommendations 9 and 12 in the ACIUCN Report)
World Heritage status requires presentation of the natural and cultural heritage whilst ensuring that the activities of visitors are not likely to impact adversely on the values of the area. The natural attractions of Shark Bay include many of the features for which the area is included in the World Heritage List. In addition, Shark Bay is considered one of the most popular recreational fishing locations in Western Australia. Proposals to facilitate and encourage visitor access are currently under consideration.
ACIUCN recommends that an overall visitor management strategy be developed as a matter of priority, with particular reference to areas of high nature conservation value, to ensure that tourism and recreational fishing are consistent with maintenance of World Heritage values.
The Australian Government, via a letter dated 4 May 2000 has, informed the centre that a detailed response to the recommendations of the ACIUCN report, presented in the document WHC-2000/CONF.202/INF.11, will be presented at the time of the twenty-fourth session of the Bureau.

The Bureau, based on additional information that will be submitted at the time of its session, may wish to take appropriate decisions thereupon.

IUCN has informed the Centre that it wishes to amend the Focused Recommendation no. 2 in the working document submitted to the twenty-fourth session of the Bureau as follows: “ACIUCN recommends that no mineral sands mining or exploration should be permitted if it is likely to cause damage to the Shark Bay World Heritage Area and World Heritage values.” The Bureau may wish to seek the views of the State Party to this rewording of the Focused Recommendation no.2 at the time of its extraordinary session.

IUCN and the State Party however, need to consult further to establish time frames for execution of the actions by the State Party for implementing each of the five Focused Recommendations. As in the case of the Great Barrier Reef, IUCN and State Party need to agree on a “Framework for Management” for monitoring the implementation of the five Focused Recommendations for Shark Bay World Heritage Area. Most of the information needed to elaborate such a “Framework for Management” is already contained in the Australian Government response to the ACIUCN Report. The date of completion of each planned action is due as one aspect that IUCN and the State Party need to establish in order to prepare a “Framework for Management” similar to that prepared for the Great Barrier Reef in 1999. Such a Framework will provide a basis for monitoring the progress of the implementation of each of the five Focused Recommendations for monitoring the state of conservation of Shark Bay based on submissions of annual reports by the State Party.

The Bureau reviewed the overall report entitled "Shark Bay World Heritage Area (Australia): Condition, Management and Threats", that provides a comprehensive assessment of issues at Shark Bay and noted that the Australian Government prepared a response dated 21 June 2000 which was transmitted to the Centre on 26 June 2000.

IUCN noted that the ACIUCN process for monitoring has continued and has produced the report on Shark Bay. It was hoped that subsequent reports could be submitted for the Wet Tropics and the Tasmanian Wilderness World Heritage sites. IUCN pointed out that this has been a very successful process. However, ACIUCN currently has a major budget problem which raises questions about the future of this monitoring process and discussions are taking place to resolve this issue. The ACIUCN’s comprehensive monitoring exercise for this site involved a series of stakeholder consultations and extensive joint involvement of government and NGOs. The report identified five priority action areas:

The Delegate of Australia commended the progress made with the ACIUCN monitoring process for this site and noted that the site is a complex one, inscribed under all natural criteria. It has also significant social and economic values.

The Observer of the United States pointed out that the component of the ACIUCN report relating to mining is based on the “WCPA Position Statement on Mining and Associated Activities in Relation to Protected Areas” and that this position statement was not adopted by IUCN, or the World Heritage Committee.

The Bureau noted the report provided and welcomed the fact that the State Party had prepared a consolidated response outlining proposed actions to implement the recommendations of the report. The Bureau requested IUCN to review this report and provide information to the twenty-fourth extraordinary session of the Bureau.

The Secretariat informed the Committee that a letter on the recent grounding incident was received from the Australian authorities on 28 November 2000 and that a report will be presented to the twenty-fifth session of the World Heritage Bureau in 2001.

“The Bureau commends the State Party and IUCN to have successfully repeated the process applied to the Great Barrier Reef for the Shark Bay World Heritage area. The Bureau urges them to develop a Framework for Management that could be used as a basis for annual monitoring of progress in the implementation of the five Focused Recommendations and submit it to the consideration of the twenty-fifth session of the Bureau in 2001.” 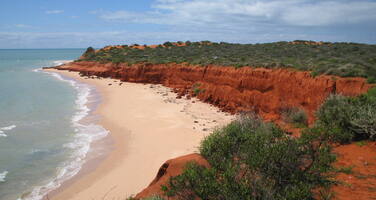