New information: In April 1999, the Secretariat received a report from a university-based scientific research institute in Korea, indicating that an out-dated incinerator banned in many countries is being installed in a location 6.6 km from the Pulgulksa Temple. According to this report, the average emission rate of 0.92 ng per cubic metre of dioxin produced by this type of incinerator will have a negative impact on the Temple.

The Bureau, having been informed of a report from an independent source of the potential negative environmental impact the installation of the incinerator may have on the Pulgulksa Temple, requests the State Party to provide a scientific report to the Secretariat by 15 September 1999 for examination by the Bureau at its twenty-third extraordinary session.

New information: In August 1999, the Secretariat took advantage of an invitation to a conference held in the Republic of Korea to visit the World Heritage site of the Sokkuram Grotto and the Pulgusksa Temple and to discuss with the national and local authorities on the Bureau’s concern over the planned construction of an incinerator which may have a negative impact on the site and the local inhabitants. The State Party submitted a brief report in October 1999 stating that the construction in 2002 of the trash incinerator in the region of Kyongju is still pending the City Council approval due to strong opposition from citizens and environmental protection groups. The State Party requested the Secretariat to inform the Committee that if the construction, to be located 6.6 km away from the World Heritage site is approved, the central government will monitor the process to ensure that the municipal authorities comply with the international dioxin emission standards (0.1ng/m3) and the National Waste Management Law, as well as to exam the surrounding natural environment.

The Secretariat received a report indicating that an out-dated incinerator banned in many countries is being installed in a location 6.6 km from the Pulgulksa Temple.  According to this report, the average emission rate of 0.92 ng per cubic metre of dioxin produced by this type of incinerator would have a negative impact on the community surrounding the Temple.

The Delegate of the Republic of Korea informed the Bureau that although the City of Kyongju was implementing the construction of the incinerator, due to strong opposition from the local communities, the project had been temporarily halted. However, in view of the existing possibility of the construction of the incinerator, which could have a negative impact, he expressed his support for the Secretariat’s recommendation to the Bureau.

The Bureau, having been informed of a report of the potential negative environmental impact the installation of the incinerator may have on the surroundings of the Pulgulksa Temple, requested the State Party to provide a scientific report to the Secretariat by 15 September 1999 for examination by the Bureau at its twenty-third extraordinary session.

Change of Name of an Inscribed Property

VIII.3 The Committee approved the change of the name of the following property included on the World Heritage List:

“The Bureau, upon examining the report presented by the Secretariat thanks the State Party for its commitment to monitor the planning and eventual construction process of the incinerator to ensure that international standards are respected and that it will not have negative impacts on the inhabitants nor on the environment of the Sokkuron Grotto and the Pulguksa Temple. The Bureau requests the State Party to keep the Bureau informed through the Secretariat of future developments regarding the incinerator construction and of any other works which may impact upon this World Heritage site.” 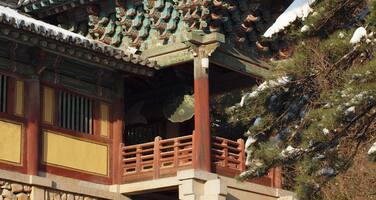 Republic of Korea
Date of Inscription: 1995