A UNESCO consultant undertook a mission to Teotihuacan in February 1997 in order to examine the state of conservation and management of the site. The report analyses the objectives and results of the 'Proyecto Especial Teotihuacan', implemented between 1992 and 1994 with a budget of US$ 12 million and six programmes: maintenance, enhancement of the Temple of Quetzalcoatl, the establishment of a Centre for Teotihuacan Studies, the creation of a new site-museum, the relocation of vendors and archaeological excavations.

The mission evaluated the results of all but one of the programmes as extremely positive and observed a spectacular improvement in the conservation and 'mise en valeur' of the core area controlled by the National Institute for Anthropology and History (INAH) and an enormous progress in the scientific knowledge about Teotihuacan. As to the relocation of the vendors, the report recalls that the works on three new accesses to the core area, which would include commercial facilities for the vendors, were interrupted in 1994 due to the discovery of important archaeological remains in La Ventanilla and disagreement expressed by various interest groups (archaeologists, environmentalists, vendors, local municipalities....). Specific recommendations are made for the revision of two of the accesses and the abolishment of the third access at La Ventanilla.

Severe concerns are expressed with regards to the application of the legal protection of the greater area of Teotihuacan as defined in the Presidential Decree of 30 August 1988. The consultant noted numerous constructions of commercial and residential nature in the immediate surroundings of the core area and along the road ('periferique') around it, serious demographic growth and urbanisation in the buffer zones and the threat posed by the expansion of Mexico City to the environment of the valley of Teotihuacan. It was recommended that the national, state and local authorities undertake the necessary studies for an extension of the legal protection of the Teotihuacan area, the sustainable development of the Valley of Teotihuacan and solutions compatible with the protection of the site and a harmonious development for the already urbanised areas.

The Bureau takes note of the results of the expert mission to the Pre-Hispanic City of Teotihuacan and commends the National Institute for Anthropology and History (INAH) for the exemplary management and conservation of the site. The Bureau requests the national authorities to examine the consultants report with great attention and to transmit its views on, and follow-up actions foreseen in response to the conclusions and recommendations contained in it to the Secretariat by 15 September 1997 for examination by the Bureau at its next session.


21st extraordinary session of the Bureau in 1997:
The Bureau took note of the communication of 26 September 1997 of the Government of Mexico and a detailed report provided by the Mexican Delegation on the actions taken by the Government of Mexico for the protection, preservation and management of the site. The report dealt with the management of the site, the measures taken with regard the commercial areas and the creation of a commission for the monitoring of the developments in the valley where Teotihuacan is located. The Mexican Delegate stressed that the recommendations of the UNESCO expert mission to the site coincide almost entirely with the actions undertaken and planned by the authorities.
The Bureau commended the Mexican authorities on the positive response to the recommendations of the UNESCO expert mission. It requested the Mexican
authorities to submit a report on the implementation of the recommendations by 15 April 1998 for examination by the Bureau at its twenty-second session.

The Bureau requested the Mexican authorities to respond by 15 September 1997, to the recommendation of an expert mission. At the time of the preparation of this document, no report had been received.

The Bureau may wish to examine information that may be available at the time of its session and take appropriate action thereupon.

The Bureau took note of the results of an expert mission to the Pre-Hispanic City of Teotihuacan and commended the National Institute for Anthropology and History (INAH) for the exemplary management and conservation of the site. The Bureau requested the national authorities to examine the consultant's report with great attention and to transmit its views on, and follow-up actions foreseen in response to the conclusions and recommendations contained in it to the Secretariat by 15 September 1997 for examination by the Bureau at its next session. 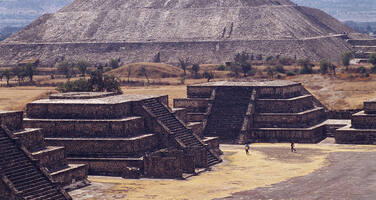