The Historic Centre of Vilnius was inscribed on the World Heritage List in December 1994. Located in the centre of the Lithuanian capital at the confluence of the Neris and Vilnia Rivers, this 359ha historic area is an outstanding example of Gothic, Renaissance and Baroque architectures, as well as the blending of Eastern and Western European cultures.

As it is in need of restoration, the Lithuanian Government, in consultation with the World Heritage Centre, launched a comprehensive rehabilitation programme. Heritage and real property laws were amended. A series of studies were initiated and experts' meetings were scheduled. The first of those meetings took place in April 1995, the next one is planned for November 1995. The World Heritage Centre was instrumental in securing for the City of Vilnius a financial assistance of the amount of $US 180,000 granted by the World Bank in order to develop a comprehensive Revitalization Strategy. An international team of consultants has been selected for this task; the World Heritage Centre was invited to evaluate the consultants' proposals.

In June, the Director of the World Heritage Centre travelled to Vilnius and met with the President of Lithuania, the Prime Minister, the Chair of the National Assembly, the Leader of the Opposition, the Mayor of Vilnius and several other Lithuanian dignitaries in order to discuss the broad principles of the Old Town Revitalization Plan, in accordance with UNESCO standards. The Vilnius Old Town Rehabilitation Programme is backed by a strong consensus and unflinching political will.

This ambitious undertaking raised considerable interest in several States Parties, notably in Scandinavia, Canada and the U.S.A. The New York-based World Monuments Fund has, for instance, initiated an activity regarding the rehabilitation of the Bernardine Convent.

The Lithuanian Government has offered premises in the Old Town in order to set up a UNESCO House, that is new office space for the UNESCO National Commission as well as exhibition space, meeting rooms and a documentation centre. The Vilnius UNESCO House is scheduled to open its doors in 1996.

With the help of PROCEED and private sponsors, a promotional brochure on Vilnius Old Town will be published. Likewise, it should be noted that several secondary schools of Vilnius will participate as of 1996, in UNESCO's "Young People's Participation in World Heritage Preservation and Promotion" project which includes students' involvement in on-going restoration projects.

Following the Revitalization Strategy Report, an International Donors and Investors Conference will take place in 1996, in order to secure international financing for the rehabilitation programme.

The Committee took note of the report on the comprehensive rehabilitation programme for the City. It commended the Government of Lithuania and the municipal authorities of Vilnius for their timely and appropriate initiative.

"The Committee took note of the report on the comprehensive rehabilitation programme for the City. It commended the Government of Lithuania and the municipal authorities of Vilnius for their timely and appropriate initiative and commended UNESCO, its World Heritage Centre and donor institutions for their support." 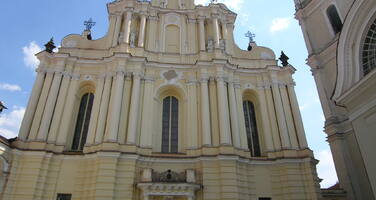