At the eighteenth session of the World Heritage Committee, a report on the state of conservation of Ihla de Mozambique was presented. The report was part of the Systematic Monitoring Exercise, undertaken in collaboration with the, then existent, UNDP/Unesco Regional Project for Cultural, Urban and Environmental Heritage, Lima (1991-1994). Subsequently, the Government of Mozambique requested a mission, whose task was to:

The World Heritage Centre, in consultation with the authorities, fielded a mission to Mozambique in July 1995. The main findings are summarized below.

The economic base of the Island remains precarious - reflecting the overall situation in the country. The cyclone in 1993 has seriously affected the built-architecture and urban fabric of the Island. The Ihla always had two kinds of distinct habitations (North : stone/lime and the city of Straw-Macuti); they are in precarious conditions. Self-help projects in Macuti City and some parts of the Stone City are underway. The infrastructure of the Island in water/sanitation, drinking water, sewage system, adequate electricity - energy, transport and communication is below the poverty line. So is the situation of ill-housing, including some squatters in the Stone City, environmental problems on beaches (waste disposal and defecation on the beaches); garbage collection. The human element of the Island is enthusiastic - good - willing, with a desire to rehabilitate their Island and conserve their heritage.

All funding for the Island at present is international. No substantial matching fund in cash or even in kind are available. The mission met with the donor community. Generally there is a "Donor Fatigue" and set of priorities. However, with the Prime Minister's statement of political will following the mission's visit, there is good hope for joint ventures with the Mozambique authorities for a future Sustainable - Urban Integral Cultural Heritage Project with different components.

As to Monitoring, with the exception of the systematic exercise carried out in 1994, there is no monitoring in place and there cannot be - until such time that a management/project execution office is put in place in the Island in situ.

4. Outcome of the mission

The consultants have provided the outline of a programme which includes:

1) Physical restoration and maintenance programme of the Cultural Heritage;

3) Rehabilitation of the human settlement;

This "Comprehensive - Integral - Sustainable Conservation and Rehabilitation" Agenda has to be set up for the Island (1995­2000), and funded by external donors. The mission already identified a series of projects within the Integral Conservation Programme. These include :

a) The urban pattern gardens, squares and street furniture, sea-front and beaches.

b) Monuments and Public Buildings (Restoration and readaptive use)

The Bureau may wish to recommend the Committee to adopt the following:

The Committee was informed that the World Heritage Centre undertook a mission last July in order to:

- define the necessary measures to prepare an integrated rehabilitation programme for the Ihle;
- establish the list of urgent conservation work.

The report of this mission was discussed last November in Paris, with the Minister of Culture who asked the Director- General of UNESCO for a Funds-in-Trust to be administered in Maputo by a steering Committee. The UNESCO Representative in Mozambique would be a member of this Committee. The Mozambique authorities and UNESCO plans to allocate resources which will be used to implement the integrated rehabilitation programme defined in the report. 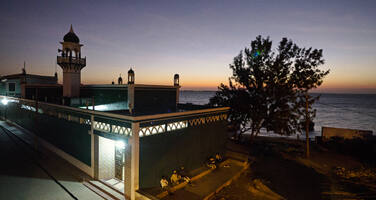