On 25 January 2013, a report on the state of conservation of the property was submitted to the World Heritage Centre by the State Party in response to Decision 35 COM 7B.64 (UNESCO, 2011). The State Party’s report is comprised of summaries of the current status and anticipated directions for the overall strategy for the protection of cultural heritage as well as legal and planning instruments and new administrative collaborations and procedures.

a)  Overall strategy for the protection of cultural heritage, including a Management Plan

The State Party’s report notes the implementation of Directives (2006, 2008 and 2009) that have expanded the protected areas of the Historic Centre, and the completion of several urban design studies on the interconnections of the Historic Centre with neighbouring districts in the wider setting. The report summarises a number of initiatives that have been undertaken under the guidance of a multi-disciplinary management system with a view to fostering a clearer understanding of the Outstanding Universal Value (OUV) of the property. The State Party provides some examples on the conservation projects that reinforce the identity of the historic trade port. A widened scope of protection will be introduced in the property’s forthcoming Management Plan, in the form of broader control-planning instruments with its structure expected to be published as part of the new Heritage Law. Details related to the Management Plan have also been shared in the report. The Plan’s publication date is not specified.

b)  Legal and planning instruments

The State Party’s report recalls the instruments enacted as a result of past decisions of the World Heritage Committee, including the 2008 Chief Executive Directive 83/2008, setting building height limits for sensitive areas adjoining the buffer zones and the 2009 Regulatory Decree aimed at preserving the urban harbour and the visual linkages between the Historic Centre and the western riverside. The report states that the property’s legally protected areas have now been enlarged beyond the limits of the buffer zones to cover nearly all of the eastern and western side of the Macao Peninsula, with the intent of protecting the property from adverse developmental pressures. The local administration has already implemented these legal instruments. The State Party also reports that the structure for the new Macao Heritage Law was approved by the Legislative Assembly in October 2012, and the Law is expected to be published in August 2013. Its enhancements are to include, among others, multi-disciplinary coordination; legally binding technical appraisals; incentives and penalties; protection of the built heritage inside the buffer zones; and protection of both tangible and intangible heritage. The new Law stipulates that Detailed Heritage District Plans (partial plans) can be implemented before the Management Plan is finalized. The State Party emphasizes that, under the new Heritage Law, heritage conservation goals will always take precedence over all other urban plans. The State Party further reports that the final public consultation phase of the correlated new Urban Planning Law was concluded in June 2012. The draft was subsequently approved and is now awaiting evaluation by the Legislative Assembly of the Macao SAR Government.

The State Party describes the forthcoming creation of a new multidisciplinary Cultural Heritage Council, which will have as one of its main responsibilities the articulation and balancing of any eventual negative impact deriving from large-scale projects outside the buffer zones. The report also describes a move towards broader collaborations. These include the Cultural Affairs Bureau and the Urban Planning Department of the Public Works Bureau cooperating more closely in the process of producing Official Alignment Plans (PAO) for sensitive sites outside the buffer zones, consultation of Building Design Regulations, which has been mitigating projects with potentially high impacts; the Cultural Affairs Bureau having direct member participation in various urban design committees; and consultative committees having representatives from both the public and private sectors. The adjustment in the Macao SAR administration’s procedures has literally controlled negative impact of projects by avoiding adverse design decisions being made at preliminary designed stages.

The Retrospective Statement of Outstanding Universal Value (OUV) for the property, as requested by the Committee, has been submitted for consideration by the World Heritage Committee at its 37th session in 2013 under item 8 of the Agenda.

3.  Takes note of the progress made in addressing the continuing inadequacy of the current management system in providing effective protection of, and addressing potential threats to, the attributes that  maintain the Outstanding Universal Value of the property;

4.  Also takes note of the State Party’s efforts to establish appropriate legal and planning instruments to protect, inter alia, the visual linkages between the inscribed property and the wider urban landscape and seascape of Macao;

5.  Requests the State Party to finalise the Management Plan by 1 February 2015 in compliance with the new Macao Heritage Law, the correlated new Urban Planning Law and other legal and planning instruments, and to submit the plan to the World Heritage Centre, for review by the Advisory Bodies. 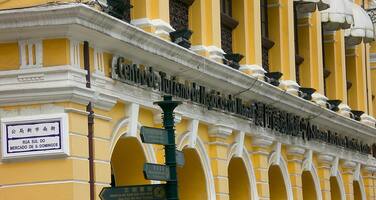