ICOMOS has been involved in collaboration with the authorities responsible for this site since the autumn of 1988, two years prior to its inscription on the World Heritage List. At that time, the USSR conservation official Jonas Glemza (then a Vice-President of ICOMOS) organized an international symposium at the site for 108 conservation professionals, including ICOMOS's International Wood and Vernacular Architecture Committees, in order to examine conservation problems at the site. The Wood Committee's recommendations were adopted at the time and have served informally to guide activity at the site ever since.

Following inscription on the World Heritage List in December 1990, the site entered a period of further difficulties, at least in the short term, during the transfer of authority to the Russian Federation from the former Soviet Union. Many of the site's current problems relate to uncertainties over budget, priorities, and responsibility within the new government as it continues to organize itself.

ICOMOS was invited to undertake an exploratory mission in October 1992 to examine the degree of urgency and the nature of the problems at the site. This mission (in summer 1993) resulted in an extended period of field visits and exchanges between an invited group of eight ICOMOS conservation specialists from Canada, Finland, Germany, and Norway, and more than twenty-five of their Russian counterparts.

Given Russia's difficulties in paying its World Heritage contribution, no financial or technical assistance has been possible from the World Heritage Fund for this site. Using extra-budgetary contributions made by the Canadian Government to UNESCO for ICOMOS projects, ICOMOS has taken the initiative to bridge the gap in the short term, given the severity of the problems at the site. This group's recommendations were presented to the World Heritage Committee at its meeting in Cartagena in December 1993 and accepted as a. basis for further involvement by ICOMOS during 1994.

ICOMOS Canada conservation architect Andrew Powter has continued to lead coordination of technical efforts for conservation planning at the site. However, in spite of the Committee's ongoing encouragement for the project and a further extra-budgetary contribution by Canada (through UNESCO to ICOMOS) in 1994 to support travel expenses, project momentum has been difficult to maintain. Political circumstances in Russia remain difficult, and few significant financial resources for project support appear to be available.

In early May 1994 Andrew Powter met the Vice-Minister of Culture of the Russian Federation, Mr Mikhail Shvidkoy, accompanied by Ministry staff and Russian professionals (including two members of the Russian ICOMOS National Committee, Makovetskii and Semenova) in Moscow. His status report (available from ICOMOS) presents a fairly positive view, despite the continuing problems. It is clear that the Russian authorities have made considerable improvements for site conservation and management in the two years since the initial mission. Improvements to legislation covering the site and the assignment by the Russian authorities of an individual responsible on site for ongoing liaison and coordination with the Russian authorities (architect Tatyana Vachromeyeva) have been key factors in this improvement.

The meeting's primary conclusions were the following:

This report to the Bureau is for information only, and no action is requested. ICOMOS will provide a detailed report to the Committee in December, including a long-term assessment of conservation problems at the site for the decade to come.

It was recalled that since 1991 ICOMOS had presented to the Committee and the Bureau reports on its involvement in the monitoring of this site and on the efforts to conserve and restore its monuments. ICOMOS reported that the legal protection of the monument and the buffer zone had been considerably improved and that a conservation professional had been assigned. The workplan for 1994 had been completed and included:

A short and a long-term budget and workplans had been established and ICOMOS involvement was foreseen for its implementation. In view of the financial constraints in the Russian Federation, ICOMOS recommended the following:

The Committee endorsed these recommendations and requested ICOMOS in consultation with the Secretariat to implement them.

The Bureau was informed of the considerable improvements for site conservation and management in the two years since the initial mission. These improvements were achieved with the support of the Canadian Government. The Bureau noted with satisfaction that ICOMOS will provide a detailed report to the Committee session in December, including a long-term assessment of conservation problems at the site for the decade to come. 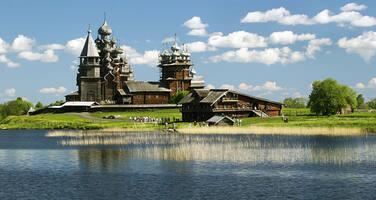