At the invitation of the Museums Department, which is responsible for the conservation of the archaeological heritage of the island, UNESCO sent a mission to Malta from 21 to 25 August 1994.

It is recalled that in 1992, at its sixteenth session, the World Heritage Committee had attributed US$ 30,000 (of which US$ 20,000 have already been released) towards the installation of air conditioning on the upper level of the Hypogeum where the guided tour begins. Prior to that, in-depth studies had defined the standards to respect with regard to the number of visitors, frequency and duration of the visits, with the objective of preventing heat and humidity from encouraging the proliferation of micro-organisms which would deteriorate the mural paintings. The site has now been closed for nearly three years, and work on the installation of the visitor service, electricity and air conditioning should have begun 18 months ago. However, almost nothing has been achieved, except for the masonry work of the future visitor's hall. As described in Dr. Ercoli's expert report requested by UNESCO in 1992, the decayed sewage and water supply pipes laid under the streets adjoining the site leak permanently into the soil in numerous places. This causes water to stream within the Hypogeum, particularly at the intermediate level, which is the most exceptional part, and where water drips constantly from the ceiling and the walls. No work can be undertaken in these conditions, and the micro-organisms proliferate on certain parts of the walls threatening to irreversibly damage the wall paintings, while elsewhere they are progressively covered over by whitish deposits of calcium carbonate.

The defective pipes should imperatively be replaced without delay but, in spite of continuous and repeated efforts, the Museums Department has been unable to obtain from the technical ministries concerned that even the smallest effective measure be taken, even though funds have been approved to this effect.

Faced with the alarming situation at this World Heritage site, the Committee may wish to express its concerns and reiterate that these problems should be treated at Government level, and that all the necessary technical and financial means, manpower and legislation, be urgently made available to the national authorities responsible for conservation in order to:

a)        proceed with the necessary repairs to the sewage pipe system to ensure that the Hypogeum is made impervious;

b)        continue and finish enhancing the site, especially the work partially financed by the World Heritage Fund, so that the Hypogeum can finally be reopened to the public under conditions which will ensure its conservation.

The Committee may wish to request the authorities of Malta to report before 1 April 1995 on the progress made in the conservation and management of this site.

The Committee was informed by the Secretariat that the Hypogeum of Hal Saflieni has now been closed for three years and the air-conditioning works, partly financed by the World Heritage Fund, which should have begun two years ago, have not yet started. This situation is caused by the permanent trickling of water inside the monument as a result of the decayed sewage and water supply pipes layed under the streets adjoining the site. This constant dripping of water encourages the proliferation of microorganisms and of calcium carbonate deposits on the walls which threaten to irreparable damage to the mural paintings. The Committee expressed to the national authorities of Malta its serious concerns and insisted that these problems be treated at government level and that all necessary technical, budgetary, manpower and legal means be immediately placed at the disposal of the national authorities entrusted with conservation in order to:

a) proceed with the necessary repairs to the sewage pipe system to ensure that the Hypogeum is made impervious;

b) continue and finish enhancing the site, especially the work partially financed by the World Heritage Fund so that the Hypogium can finally be reopened to the public under conditions which will ensure its conservation.

The Committee requested the authorities of Malta to submit a detailed report before 1 April 1995 on the progress made in the conservation and management of the site. 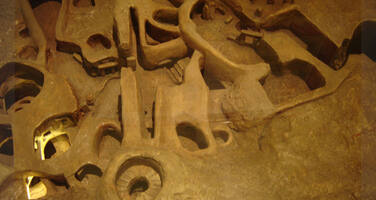