When examining item 11 of the agenda concerning international assistance, the Committee will have to consider a request by Bulgarian authorities in relation to the Madara Rider.

This monument, inscribed on the World Heritage List in 1979 under criteria (i) and (iii), is at present in great danger according to the expert report annexed to the present document.

Reading the report reveals profound differences in opinion as to the methods to be applied for the conservation of the Madara Rider. It seems that the hypothesis of displacing the sculpture is considered. This does not however meet the agreement of UNESCO's expert. In any case and even before the necessary studies have been completed which should determine the modes of conservation agreed upon, the Committee might wish to question the situation of a property whose conservation can only be ensured by displacing it from its original context.

The question indeed is to know whether a property or a site inscribed on the World Heritage List, of which one of the elements has been taken away, can be maintained on the List, in particular when the displaced element has been a determining factor in the inscription. 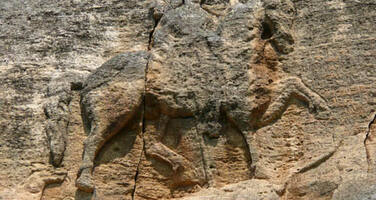