Concerning the floods, the requested update report on the rehabilitation works in the World Heritage property had not been received by 1 February 2004. By letter of 13 April 2004, the German authorities informed the Centre that the situation at the site is basically unchanged since the last report to the Committee in April 2003. The removal of the overall damages has been estimated at about 13,7m Euro with one third of the damages being already fixed. Yet, the remaining two thirds of the damages concern sensitive building fabric so that the appropriate rehabilitation works are foreseen to take until 2006, among others due to financial constraints. The State Party is confident that by 2006 the original state of the Garden Kingdom before the floods will be restored.

No new information has been received on the Elbe Waterway Improvement Project. In April 2003 the German authorities reported that the "Elbe Waterway Improvement Project " had been suspended and that the resumption of the planning process is generally favoured but cannot be predicted. Before the suspension of the Elbe Waterway project, IUCN pointed out the lack of an overall evaluation (Environmental Impact Assessment) of the construction work on the river Elbe. This assessment remains valid in case of a resumption of the project.

1. Regretting that the German authorities did not provide the updated information requested (Decision 27 COM 7B.66),

3. Further requests the State Party to provide information to the World Heritage Centre in case the authorities of Saxony-Anhalt take any steps towards the implementation of the Elbe construction projects.

1.  Regretting that the German authorities did not provide the up-date information requested,

2.  Requests the State Party to provide information on the current conditions and the rehabilitation works on the World Heritage site to the Centre in due course;

3.  Further requests the State Party to provide information to the Centre in case the authorities of Saxony-Anhalt take up any steps towards the Elbe construction projects. 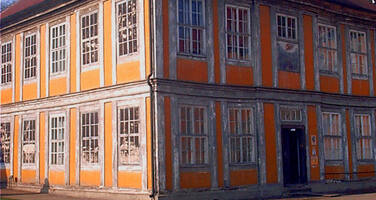