Illegal demolition of listed and non-listed buildings and illegal construction of buildings not in conformity with the conservation plan (PSMV) in the World Heritage protected area; public works financed by the Asian Development Bank threatening the urban wetlands and core area of the World Heritage site

Following the endorsement by the World Heritage Committee, at its 26th session, of the recommendations made by the UNESCO and ICOMOS experts during their mission in April 2002, the State Party has undertaken the following actions to comply with the 8 corrective measures identified:

The Conservation and Development Plan (PSMV) has been officially endorsed and enacted by the Central Government with the release of Decree no. 175/PM dated 6 November 2003; Ministerial and local orders have been issued concerning the demolition of any construction failing to conform to the PSMV.

b)       Measure 2 concerning enforcement of law and regulations:

The Committee of Construction Permits has admitted the Heritage House (Maison du Patrimoine) representative as a new member and has also been closely monitoring all construction works after the permits have been issued. To this date, 36 serious illegal constructions have been declared, and their permits withdrawn. Two illegal buildings have been destroyed following this monitoring activity. However, continued small-scale violations of the PSMV have been reported within the core zone of the World Heritage property of Luang Prabang.

c)       Measure 3 on awareness-raising of the PSMV by the local administration:

An extensive public information campaign on the PSMV has been carried out by the Heritage House and is still ongoing, involving heads of provincial departments and local mayors. Various national and international legal instruments for the preservation of cultural and natural heritage have been introduced by the Heritage House at a large audience meeting on 18 December 2003.

d)       Measure 4 on awareness-raising of the PSMV by enterprises:

The Heritage House has organized a three-month training session, for the Urban Development Administration Authority (UDAA), as well as for architects and engineers of the relevant construction enterprises.

The effects of the road construction at Bua Kang Bung have been mitigated by reducing the width of the road and building one drainage canal instead of two. The construction of the retaining wall along the Mekong river has been stopped, and embankments and gabions along the river have been improved by soil filling and plantation of trees and vegetation.

Local and National Committees for the Cultural and Natural National Heritage are meeting on a regular basis and exchanging all necessary information.

The Post Office intersection has been given particular attention, and its World Heritage value has been maintained, following the successful implementation of the Asia-Urbs programme. A local management commission is in charge of implementing the regulations adopted after public consultation to ensure that cultural and ethnic diversity is preserved at this place.

h)       Measure 8 on the establishment of a Fund to assist the local population:

The supply of construction materials such as quality tiles has been successfully performed by the Fund. To ensure the financial sustainability of the Heritage House and to finance conservation projects, the Ministry of Finance authorized the provincial government to institute a heritage conservation fee.

At its 27th session in 2003, the Committee requested the State Party to take all necessary measures to further reduce vehicular traffic and noise pollution that impact on the core area of the property. As a consequence of this request, a traffic regulatory system is under study. The main road from the Post Office intersection to the Royal Palace has been transformed into a pedestrian way and night bazaar.

The Agence Française de Développement (AFD) proposed to fund the study of a coherent territorial planning scheme, to guide the extension of the town of Luang Prabang with the creation of a new town to the north of the historic area, which will accommodate the new business and Government offices, as well as the Souphanouvong University. The World Heritage protected area is being included in the perimeters of the Nam Khan River Park, which is now under study for eventual nomination as a UNESCO Man and the Biosphere (MAB) site. As regards pollution mitigation, no scientific research has been conducted in Luang Prabang.

1.       Commends the State Party for the completion or ongoing implementation of the eight corrective measures recommended by the March 2002 UNESCO-ICOMOS joint mission to Luang Prabang;

2.       Supports the Agence Française de Développement-funded study of the coherent territorial planning scheme to decompress the infrastructural pressure on the historic centre of the World Heritage property;

3.       Notes with concern the continued violations to the PSMV and the illegal constructions, which constitute a serious threat to the World Heritage values of the property and encourages the State Party to ensure adequate legal enforcement of the PSMV;

4.       Reiterates its deep concern at the insensitive public works of road upgrading along the Mekong and Nam Khan rivers, carried out by the Asian Development Bank, resulting in oversized drainage, widening of roads into the non-constructible urban wetlands protected area

5.    Urges the State Party to take immediate action for the mitigation of the negative impacts of the public works on the World Heritage values of the property;

6      Requests the State Party to submit to the World Heritage Centre, by 1 February 2005, a progress report on the research and actions undertaken to mitigate air and noise pollution on-site, as well as on the legal enforcement of the PSMV, to be examined by the World Heritage Committee at its 29thsession in 2005. 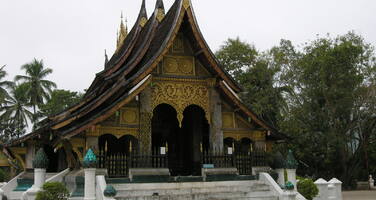