The Municipality of Salamanca provided on 25 February 2005 extensive documentation in Spanish only.  The report details the changes to the Plan Especial within the boundaries of the World Heritage property, with additional official reports, plans, and projects.  However, the changes made to the building plot of the Adoratrices was only documented by a single-page letter from the Caja de Duero reporting the decision to defer the building of the Auditorium pending the approval of the new General Plan.  ICOMOS commented that the Plan General de Ordenación Urbana del Municipio de Salamanca.  Revisión-Adaptación 2004 takes into account the 26 modifications approved over the past two decades (of which twelve are located inside the boundaries of the World Heritage property), giving them further legality, and ends by legitimizing some important interventions that have a negative impact.

The document further recognizes that the boundaries of the World Heritage property have already been reduced and almost fragmented when compared with the consolidated historic fabric, since they exclude the areas that are undergoing immense changes.  The boundary of the historic centre of Salamanca was fixed in 1989.  The submitted plan, which aims at providing detailed information on the historic centre, indicates that the Plan Especial de Protección y Reforma Interior del Recinto Universitario y Zona Histórica-Artística, in force since 1984, satisfies 90% of the objectives relating to urban planning, building, and functional balance.  New objectives have also been introduced, since it has been recognized that the Normativa Edificatoria shows some gaps and is vague and too permissive.

Further information provided contained the licences granted up to 2002, whilst the related files and tables outline the Auditorium project on the Huertos de las Adoratrices plot.  Without taking into account the functional choice, either in general or in relation to the requirements of the specific area in terms of the equipment and the historic context problems, it should be emphasized that the choice seems to conflict with the Objetivos y criterios de planeamiento.  It could endanger the achievement of a proper balance between services and residential uses, cause road system problems and vehicle congestion, as well as overload the already precarious balance between building and vacant areas.

Finally, it has to be stated that there is no reference to any integrated Management Plan for the World Heritage property as a whole as requested by the Committee (28 COM 15 B.98, paragraph 5).

3. Thanks the State Party of Spain for having submitted an updated report on the state of conservation of the property;

4. Regrets that the State Party did not provide the integrated management plan for the property as requested;

5. Requests the State Party to improve and implement specific legislation so as to ensure appropriate legal protection of the historic urban fabric and structure on a national level;

6. Also requests that the World Heritage Centre and ICOMOS submit an updated detailed report on the legal protection and management of the property, for examination by the Committee at its 30th session (Vilnius, 2006)

7. Requests the State Party to provide the World Heritage Centre with a copy of the management plan as part of the documentation of the European Periodic Report for Section II and to provide a progress report by 1 February 2007 for examination by the Committee at its 31st session (2007).

3.  Thanks the State Party for having submitted an updated report on the state of conservation of the property,

4.  Regrets that the State Party did not provide the integrated Management Plan for the property as requested;

5.  Encourages the State Party to improve specific legislation so as to ensure appropriate legal protection of the historic urban fabric and structure on a national level; 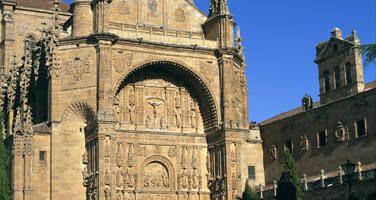