A joint UNESCO Tehran Cluster Office and Iranian Cultural Heritage and Tourism Organization (ICHTO) mission took place in June 2004 to collect up-to-date information concerning the Jahan-Nama Commercial Complex.  The mission undertook consultations with the representatives and key decision-makers of the national and local authorities who have the authority to take action related to the Jahan-Nama Commercial Complex and the core and buffer zones of the World Heritage property of Meidan Emam.  It emerged from the consultations that a National Technical Committee had been formed, including the main stakeholders and decision-makers, to review the matter and arrive at an agreed proposal for the reduction of the tower.  This National Technical Committee had agreed to reduce the maximum height limit to 12 metres for the first section of the Complex nearest to this property (nearly 85 metres), in compliance with the legal provisions of the Urban Development Plan and Protective Zones of Esfahan Historic City, which were adopted by the national and local authorities in 1995.  Concerning the tallest part of the complex, located at some 700 metres from the Meidan Emam, which currently reaches 58 metres in height, the Iranian Cultural Heritage and Tourism Organization (ICHTO) had suggested that it be reduced to 24,5 metres, to avoid any visual impact on the World Heritage property.  However, no decision has been taken so far on the matter.

According to a report from the Government of Iran, received by the World Heritage Centre on 31 March 2005, the case of the so-called Jahan Nama building complex has now been referred to the Esfahan Justice Department.  The Union of Human Rights Defendants, an Iranian NGO, has officially filed a complaint to the Esfahan Justice Department regarding the negative impact of the building on the World Heritage Property.  Moreover, ICHTO’s Legal Department has submitted a penal complaint to the Esfahan Court in order to compel the Municipality of Esfahan and the constructor of the building to undertake the necessary action to mitigate the negative impact of this building on the World Heritage Property and its surroundings.  H.  E.  the Governor of Esfahan also has submitted a legal complaint to the Prosecuting Attorney of Esfahan, based on the violation of construction criteria approved by the Commission (Article 5).  In April 2005, the Court was expected to make a decision on whether or not the Jahan Nama building would be reduced in size.  At the time of the writing of the present report, however, the World Heritage Centre had received no information on the outcome of this legal case.

Thanks to a contribution from the French Government, the UNESCO Tehran Cluster Office will organize a Stakeholders’ Workshop on Meidan Emam, Esfahan, which will be probably held in May or June 2005.  The aim of this Workshop is to enhance information exchange, understanding and co-operation between local and national authorities as well as other stakeholders involved in the conservation and management of Meidan Emam World Heritage property, and discuss a preliminary action plan to implement the recommendations of the World Heritage Committee.

3. Having taken note of the fact no final decision has yet been taken by the Esfahan Justice Department concerning the reduction of the height of the Jahan-Nama multifunctional complex,

4. Having taken note, furthermore, of the intention expressed by the State Party of the Islamic Republic of Iran to comply with the past recommendations of the World Heritage Committee in this regard,

5. Regretting, however, that as of the end of June 2005 the construction of the multifunctional complex was still underway,

6. Strongly urges the State Party to halt the on-going construction of the multifunctional complex and continue its efforts to implement the decisions of the World Heritage Committee as well as the recommendations of the National Technical Committee, in order to reduce the height of the complex to 12 metres for the eastern side of the complex, closer to the World Heritage property, and to 24 metres for the western side, including the tower, in accordance to existing building regulations in the area and with a view to ensure the conservation of the authentic setting and integrity of the historic city of Esphahan surrounding the Meidan Emam World Heritage property;

7. Decides to automatically inscribe the property on the List of World Heritage in Danger on 1 February 2006, in consideration of the serious deterioration of the architectural and town planning coherence (ascertained danger) and of the threatening effects of town planning (potential danger) on the outstanding universal value of the property, unless the State Party provides by that date an official written communication to the World Heritage Centre confirming that the height of the multifunctional complex will be reduced according to the specifications provided in paragraph 6 above, and including a timetable for implementation;

8. Encourages the State Party to continue its efforts to nominate the extension of the World Heritage property of Meidan Emam, to include the historic axis consisting of the Friday Mosque, the Bazaars, the ancient bridges, the Zayanderoud River, and the South Chahar Bagh Avenue, as a means to further strengthen the protection of the urban heritage of Esfahan;

9. Requests the State Party to submit to the World Heritage Centre, by 1 February 2006, a report on the state of conservation of the property including reference to the issue of the reduction of the multifunctional complex, for its examination by the Committee at its 30th session (Vilnius, 2006).
Read more

3.  Having taken note of the information provided during the session concerning the decision made by the Esfahan Justice Department on the reduction of the Jahan-Nama Commercial Complex,

Requests the State Party to pursue the implementation of the decision adopted by the National Technical Committee to reduce the height of the Jahan-Nama Commercial Complex, in order to minimize its negative impact upon the integrity of the setting of the Meidan Emam World Heritage property in Esfahan;

Decides to inscribe the property on the List of World Heritage in Danger;

5.  Encourages the State Party to continue its efforts to nominate the extension of the World Heritage property of Meidan Emam, to include the historic axis consisting of the Friday Mosque, the Bazaars, the ancient bridges, the Zayanderoud River, and the South Chahar Bagh Avenue;

6.  Requests the State Party to submit to the World Heritage Centre, by 1 February 2006, a progress report on the actions undertaken to mitigate the negative impact of the Jahan-Nama Commercial Complex and on the possible extension of the World Heritage property, to be examined by the Committee at its 30th session in 2006. 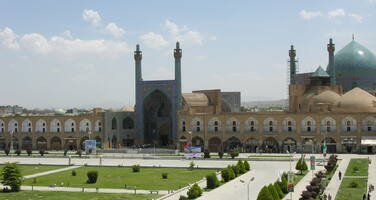