Following the joint World Heritage Centre/IUCN mission from 3 to 6 February 2004, the State Party undertook a number of follow-up activities and submitted an international assistance request for the extension of the property and for preparation of a nomination to modify the boundaries which was processed, and the project is currently underway.

Furthermore, several reports were provided by the Ministry of Environment and Water: The first letter dated 28 September 2004 informing the Centre that the Management Plan of Pirin National Park was finally approved with Decision 646 dated 6 August 2004 of the Council of Ministers of the Republic of Bulgaria; A second dated 12 January 2005 providing a map of the property and clarifying the status of different zoning arrangements; and thirdly a letter dated 19 January 2005 on the specific actions taken in response to Decision 28 COM 15B.21.

IUCN points out that in late 2004, a coalition NGO (Save Pirin) started an independent review on the environmental and economic impact of the Bansko Skiing Zone as well as on the legal aspects of the project and its implementation.  However, IUCN has yet to review a copy of the complete study and is not in a position to provide an objective assessment of the environmental impact studies.

The State Party responded to the specific request regarding the adoption of the Management Plan.  The plan identifies six zones: the reserve zone; zone of limited human impact; zone of conservation of forest ecosystems and recreation; zone for sustainable use of open territories and recreation; tourism zone, and the buildings and facilities zone.  A map indicating the original boundary at the time of the nomination was also provided.  Other additional maps clarifying earlier discrepancies were made available in January 2005 providing additional detailed information about the boundaries of the World Heritage property as declared in 1983, as well as the present boundaries of the National Park in accordance with Bulgarian legislation.

In regard to the possible exclusion of the Bansko ski zone from the World Heritage property, as well as any new territories, which may be included in the future, the State Party reports that a careful evaluation will be carried out by a team to be formed during the process of extension of the property.  The ultimate decision on the development of the ski resort will remain with the team.

In response to a recommendation to improve communication, the State Party reports that a national programme for monitoring biodiversity is being financially supported by the Dutch Government.  This programme, upon approval will officially be introduced in Pirin National Park and is expected to enhance communication between the various agents, particularly regarding monitoring information.  A Scientific Council has been established and there is a provision in the Management Plan for the establishment of a Consultative Council of the Park.

The State Party has adequately responded to the decision of the 28th session of the Committee (Suzhou, 2004), and has provided significant indications of the progress made in the implementation of the specific recommendations of the 2004 World Heritage Centre / IUCN mission concerning the state of conservation of the property, its management, its zoning, the establishment of buffer zones and improved communication.  The revised map provided is an improvement on the earlier map and is acceptable.

3. Notes with satisfaction that the State Party of Bulgaria provided progress reports on measures taken to address the recommendations of the joint 2004 World Heritage Centre/IUCN mission for examination by the Committee and that the management plan was finally approved in August 2004;

4. Commends the State Party for its continued commitment to address the conservation concerns of the property, and for providing an updated map of the property as well as for the positive steps in expanding the size of the property;

6. Further commends the Dutch and Swiss Governments for their generous financial support to Pirin National Park;

7. Invites the State Party to bring forward a nomination that will help to better define the boundaries of the property based on its outstanding universal value and issues of integrity, notably in relation to the ski area.

3.  Notes with satisfaction that the State Party provided progress reports on measures taken to address the recommendations of the 2004 World Heritage Centre/IUCN mission for examination by the Committee and that the Management Plan was finally approved in August 2004;

6.  Further commends the Dutch and Swiss Governments for the generous financial support to Bulgaria and Pirin National Park;

7.  Invites the State Party to bring forward a nomination that will help to better define the boundaries of the property based on its outstanding universal value and issues of integrity, notably in relation to the ski area. 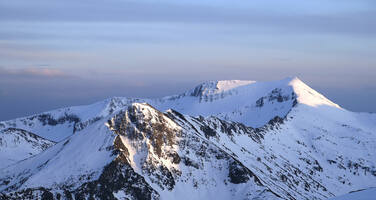