The World Heritage Centre received a number of complaints and reports from individuals and local NGOs concerning the construction of a four-lane bridge (“Waldschlösschen-Bridge”) crossing the Elbe at a crucial point for the view axis, located within the core zone of the World Heritage cultural landscape. Although the project already existed at the time of the ICOMOS evaluation in September 2003, the application papers of the State Party state that “No traffic arteries are planned in this area, though there is the possibility for new bridges”. Enclosed was a territorial land use plan (FNP) with five different alternatives for Elbe crossings, and further photo montages of the competition result for the project of the “Waldschlösschen Bridge”. In the ICOMOS text this project is mistakenly mentioned as “foreseen 5 km down the river from the centre.”

The Municipality of Dresden, which is responsible for both the conservation of the World Heritage property and the urban development, explained that the bridge project had been developped through an extensive process including an international architectural competition for the bridge construction, and involving a referendum of the citizens of Dresden that resulted in an approval of the bridge project. The bridge project is based on traffic assessments undertaken by the city of Dresden which indicated the need for an additional crossing of the river. Several counter-studies propose a tunnel solution for the river crossing, but also question the need for an additional traffic artery. It is further criticized that the traffic from and towards the bridge will be channelled through, and would affect the central part of the inner city.

After documents of the planning brief (Planfeststellungsverfahren) showed the entire extent of the intended building measures, which have resulted in fierce public discussion, ICOMOS made a statement on 10 January 2006 pointing out that “this valley crossing is no longer an ‘urban bridge’, but instead an important road connection resembling a motorway. After evaluating the documents, which have now been made available, ICOMOS comes to the conclusion that the realisation of the Waldschlösschen Bridge will lead to a considerable disturbance of the World Heritage site Dresden Elbe Valley. By all means there should now be a pause for thought to have the opportunity to inform the World Heritage Committee as well as to discuss less harmful alternatives, including a tunnel construction and other possible locations.”

On 20 January 2006, a meeting took place at the World Heritage Centre with the Mayor of Dresden, the Permanent Delegation of Germany to UNESCO, the German Foreign Office and the German National Commission to discuss the matter with World Heritage Centre staff. The Director of the Centre appealed to the authorities not to commence any construction prior to the 30th session of the Committee. He also encouraged the authorities to carry out a visual impact study of the bridge proposal.

On 18 April 2006 the World Heritage Centre received copies of a report entitled “Waldschlösschenbrücke Bridge World Heritage status”, a printed brochure and statement by the City of Dresden providing background on the decisions for the Waldschlösschen Bridge. The city authorities informed the Centre that any construction would be postponed until August 2006. Furthermore, a visual impact study of the proposed bridge project was carried out by the Institute of Urban Design and Regional Planning of the Technical University of Aachen (RWTH Aachen) and submitted to the World Heritage Centre in April 2006. This study concludes that:

a) The Waldschlösschen Bridge does not fit in with existing series of Dresden City bridges;

b) The Waldschlösschen Bridge obscures a number of views of the Dresden skyline and the Elbe Valley which are of historical importance as well as continuing relevance to daily life in the city;

c) The Waldschlösschen Bridge cuts into the cohesive landscape of the Elbe river bend at its most sensitive point, splitting it irreversibly into two halves.

Both documents by the City of Dresden and the visual impact study by the RWTH Aachen were received at the Centre on 24 April 2006, and have been submitted to ICOMOS, whose detailed review is awaited.

2. Recalling that the property was inscribed in 2004 for its outstanding universal value as a Cultural Landscape,

3. Notes with great concern that the construction project of the "Waldschlösschen-Bridge" is located in the core area of the cultural landscape;

4. Notes with satisfaction that the national authorities have commissioned a visual impact study, and the City of Dresden has suspended the construction project of the bridge until the discussions by the Committee at its 30th session (Vilnius, 2006);

5. Further notes the negative results of the visual impact study carried out on the "Waldschlösschen bridge", confirming the impact on the landscape;

6. Considers that the construction of the "Waldschlösschen bridge" would irreversibly damage the values and integrity of the property in accordance with paragraph 179 (b) of the Operational Guidelines;

7. Requests the State Party and the City authorities to urgently halt this construction project and to take up discussions with all stakeholders to find alternative solutions so as to ensure the safeguarding of the outstanding universal value of the property and to provide details on this process and a time frame in conformity with Decision 29 COM 7C;

9. Also requests the State Party to review without delay the projects in the core zone taking into account the results of the visual impact study and to provide a comprehensive update report to the World Heritage Centre by 1 February 2007 for examination by the Committee at its 31st session in 2007 in order to review the conditions for removal of the property from the List of World Heritage in Danger.

2. Inscribes the following properties on the List of World Heritage in Danger:

2. Recalling that the World Heritage property was inscribed in 2004 for its values as a Cultural Landscape,

3. Notes with great concern that the construction project of the “Waldschlösschen-Bridge” is located in the core area of the cultural landscape;

4. Regrets that the information on the project has been submitted at such a late stage, and takes note of the referendum that represents a legally binding commitment of local authorities;

5. Notes that the national authorities have immediately commissioned a visual impact study, and the City of Dresden has halted the construction project of the bridge until the Committee’s 30th session;

6. Further notes the negative results of the visual impact study carried out on the Waldschlösschen bridge;

7. Urges the State Party and the City authorities to halt any construction until further discussions are taken up with all stakeholders to find appropriate solutions for the safeguarding of the values and integrity of the World Heritage property;

8. Requests the State Party to urgently review the construction project in the core zone taking into account the results of the visual impact study and to provide a comprehensive update report to the World Heritage Centre by 1 February 2007 for discussion by the Committee at its 31st session in 2007. 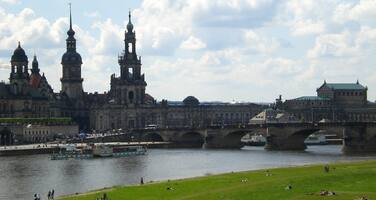