a) Lack of Management plan;

b) Lack of risk preparedness, especially in the case of fire;

Following the joint UNESCO/ICOMOS mission to the property in March 2004, the State Party was requested by the World Heritage Committee at its 28th session (Decision 28 COM 15A.39) to implement the recommendations of the mission and to submit a detailed report on its progress.

The State Party sent a report on the state of conservation of Lamu Old Town on 1 March 2005 to the World Heritage Centre, which was transmitted to ICOMOS for review.

On the basis of the report, prepared by the National Museum of Kenya, Lamu, ICOMOS and the World Heritage Centre concluded that, while the property was in a relatively good state of conservation, no restoration and upgrading of public areas had taken place since the inscription of the site on the World Heritage List. Concern was also raised about the lack of progress on implementing the recommendations of the 2004 mission, especially concerning the establishment of a management plan to protect the character of the town.

It was also noted that a decline in tourism had occurred, due to water and sanitation problems. A UNESCO mission was undertaken to Lamu Island from 12 to 22 February 2005 to assess the situation on water distribution, solid and liquid waste, in relation to public health, as recommended by the Committee at its 28th session (28 COM 15B.39). This was carried out with the support of the Italian Government through the Italian Funds-in-Trust. The mission noted inappropriate provisions for water supply and an inadequate sanitation system. The mission also emphasized the need to protect the vital water catchment area in the sand dunes off Lamu Island, from uncontrolled and illegal development.

During its 29th session, the World Heritage Committee reiterated its request to the State Party to initiate and develop a management plan for Lamu Old Town, and to consider extending the core and buffer zones of the site, to include the Shella Sand Dunes and the mangrove are on Manda Island, to better ensure the integrity of the World Heritage Property.

The State Party submitted a report to the World Heritage Centre on the status of the World Heritage property at the end of January 2006. The report notes some significant steps forward in conservation, including a building condition audit carried out in September 2005; the creation of a World Heritage secretariat to help manage the property significantly increasing staff expertise available for conservation; the Gazetting of a new local Planning Commission - not yet functional; some physical improvement projects being initiated – waterfront, Harambee St.; and the planning for design and installation of interpretive signs. Despite these positive developments, however, the report illustrates that the principal recommendations made by the World Heritage Committee at its 28th and 29th session are not being implemented. In particular:

a) No progress has been made in the preparation of the management plan, urgently needed to identify ways to reconcile the different interests that may affect the heritage value of the property;

b) No measures have been taken to improve water sanitation and waste disposal;

Moreover, the risk-preparedness issues referred to previously by the Committee have yet to be addressed including the dangers linked to the uncontrolled stocking of petrol fuel in Makuti (grass) thatched houses, which have caused severe fires in the past.

The report also makes clear that the principal impediments to conservation and to implementation of the Committee’s recommendations are the degree to which private interests are able to prevail over the public good. The National Museums of Kenya are required to intervene constantly to redress behaviours forbidden in law but which local authorities and leaders lack the will or capacity to confront. It is hoped that the newly created Local Planning Commission for Lamu, officially gazetted in 2005, but not yet operational, might assist in providing the necessary guidance and authority to overcome the problems cited.

ICOMOS noted that, despite the commitment of a small core of dedicated conservation professionals working in Lamu and with the national Museums of Kenya, the political will to protect Lamu World Heritage property seems to be lacking. ICOMOS believes that, if the State Party is unable in a year’s time (i.e. by the 31st session of the Committee) to comply with the requests made by the Committee already at its 28th session at Suzhou, then the Committee should consider placing the site on the World Heritage List in Danger.

3. Commends the State Party for the successful efforts of the persons responsible locally of the conservation, who brought improvements in this field in the course of the last year, particularly the establishment of a well staffed World Heritage secretariat for Lamu;

4. Invites the State Party to implement the principal recommendations of the Committee at its 28th and 29th sessions (management plan, buffer zone extension, improvement to sanitation, water supply, and waste management) have not been implemented;

5. Calls upon international donors to provide financial and technical support to the State Party to improve the state of conservation of the property;

3. Commends the State Party for the successful efforts of those concerned with conservation locally to make some small improvements for conservation in the course of the last year, particularly the establishment of a well staffed World Heritage secretariat for Lamu;

4. Invites the State Party to implement the principal recommendations of the Committee at its 28th and 29th sessions (management plan, buffer zone extension, improvement to sanitation, water supply, and waste management)that have not been implemented; 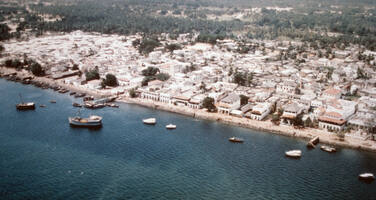