a) Proposed dam development on the Tara River;

b) Ski development in the Zabljak area;

Total amount provided to the property: USD 40,000 by UNESCO Venice;

The State Party of Serbia and Montenegro submitted a report on the state of conservation of the property on 31 January 2006. The report reiterated that the Buk Bijela dam project was stopped in 2005 and, following recommendations of both the joint 1996 and 2005 UNESCO/IUCN missions, minor boundary changes were adopted by the Committee in its Decision 29 COM 8B.15, excluding the town of Zabljak from the property.

The report further stated that a number of relevant authorities are working on the implementation of the specific recommendations of the joint 2005 UNESCO/IUCN mission. Ongoing activities include the full implementation of the Physical Plan for the Durmitor Area and the management plan for Durmitor National Park, as well as efforts to prevent illegal activities within the park boundaries such as building, logging and the development of skiing facilities.

Ongoing cooperation with the Municipality of Zabljak is further aimed at controlling future development of the urban area and improving environmental conditions and standards. The Ministry of Environmental Protection and Physical Planning of Montenegro is working on preparatory steps for the ratification of the Aarhus Convention, as encouraged by the Committee in its Decision 29 COM 7B.21, and ratification is expected in 2007. In the future, this Ministry aims to establish stronger transboundary cooperation with relevant authorities in Bosnia and Herzegovina. The Ministry of Economy of Montenegro is at the same time working on a Strategy of Energy Development until 2025 to be adopted this year. The strategy will include the definition and discussion of alternative energy sources that will not adversely affect Durmitor National Park.

The conservation of the property is governed by the Physical Plan for the Durmitor Area and the management plan for Durmitor National Park for the years 2005-2020, which was adopted for the first five years in December 2004. These plans establish a zoning system and appropriate conservation and development measures. According to the current management plan, logging and hunting activities (with some exceptions) are completely forbidden in the core zones of the National Park. IUCN and UNESCO welcome the progress made in the implementation of recommendations of the 2005 UNESCO/IUCN mission. IUCN noted that increasing demand may lead to the development of further ski facilities. Such ski facilities should only be developed outside the park boundaries and in any case should seek to avoid any adverse impacts on the property. A draft Tourism Master Plan for the mountain regions of northern and central Montenegro, including the Durmitor National Park area, has drawn some criticism from UNDP and national and international NGOs such as the International Ecotourism Society. The draft Tourism Master Plan is currently being revised by the Government.

In the context of sustainable tourism development, the State Party is encouraged to take into consideration a recent report by the International Ecotourism Society, which strongly recommends that Montenegro not pursue ski tourism and instead concentrate on summer tourism, built around its national parks and mountain towns.

The State Party of Bosnia and Herzegovina submitted a report dated 3 May 2006 informing the World Heritage Centre that the Board for Tender for the tender concerning hydro plants (five representatives from the Republika Srpska and five from Montenegro) held a joint session on 27 February 2006 and announced the unsuccessful public announcement for granting a concession for the construction of the hydro power plants of Buk Bijela and Srbinje. The State Party underlined that this confirms the commitment made by the authorities to comply with international standards and their collaboration with the authorities of Montenegro in the preservation of World Heritage.

Not examined by the Committee.

3. Welcomes the confirmation by the State Party of Bosnia and Herzegovina that no concession has been granted for the hydro power plants of Buk Bijela and Srbinje;

4. Notes that progress is being made in the implementation of the recommendations of the joint 2005 UNESCO/IUCN mission;

5. Urges both States Parties to continue to fully implement all recommendations of the joint 2005 UNESCO/IUCN mission;

6. Requests the State Party of Serbia and Montenegro to ensure that no further development of ski facilities is allowed within the property;

7. Also requests the State Party of Serbia and Montenegro to provide the World Heritage Centre with a copy of the Mangement Plan for Durmitor National Park;

8. Further requests both States Parties to keep the World Heritage Centre and IUCN informed on progress made in implementing the recommendations of the joint 2005 UNESCO/IUCN mission and of any important changes, particularly those related to tourism development, in the state of conservation of the property. 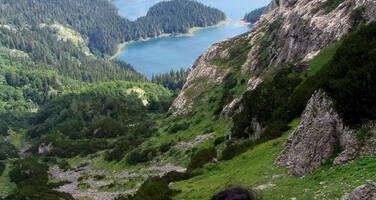