a) Lack of an integrated management plan

b) Extension to Viru Hotel

c) Development of the Skoone Bastion

Total amount provided to the property: Italian Funds-In-Trust USD 4,279 for an expert mission in December 2005

The State Party provided a detailed response to the World Heritage Centre, based on a report prepared by the Tallinn Cultural Heritage Department and comments received from the Estonian National Commission for UNESCO dated 16 February 2007, which tries to address comprehensively all issues raised by the Committee during its 30th session (Vilnius, 2006).

The Tallinn City Government, in relation to the proposed 17-storey extension to the Viru Hotel, and in order to remove this extension from the detailed plan of Viru Square, has commissioned expert assessments in heritage conservation, city planning, legal requirements, and environmental impacts. The first three of these have been completed, and the fourth (environmental impacts) is scheduled for completion on 8 June 2007. The expert assessments at this stage share concern for the impact of the volume of the already constructed building which houses a shopping centre, underground bus station and is connected by bridges to Viru hotel and Tallinn Department Store, because it has reduced open public space in the city centre and has blocked view corridors to World Heritage site of the Old Town. The new extension proposed is seen as making the situation worse, and possibly harming the nearby “nature protected park area”. After receiving all expert assessments, the Tallinn City Government is expected to take a final position on the issue of the possible extension to Viru hotel and to prepare a draft Decision for the Tallinn City Council.

The State Party notes in relation to the Skoone Bastion, and its future utilisation, that the Tallinn City Enterprise Department has organized a design contest to find a suitable public function for this site. A detailed plan for the area is now being prepared and will be finalised soon. As well, the bastion has become a municipal property and some landscaping arrangements of the area have subsequently been carried out.

The State Party report provides updates on the situation concerning the planned construction of a series of individual houses in the vicinity of the town wall between Suurtüki and Rannamäe Street. The Tallinn City Government refused to issue a building permit to the construction company Restor to erect new houses there, but in 2006 the State Court found that the city authorities' refusal to issue a building permit was null and void, because the developer's project had received all endorsements required by law. As a result of negotiations between Tallinn City Government and Restor, one of the three planned buildings will be built, but no construction will happen next to the oldest and most valuable section of the Town Wall – that is between the towers of Grusbeke and Rentern. However, one building has already been built and a similar one will be added. In addition, members of the Estonian National Commission for UNESCO have identified another similar threat - a building project at the South-Eastern side of the Town Wall, at Pärnu mnt 4/Müürivahe 30. It is noted that this project (a 6-storey new building), if realised, would impact on the adjacent Henke tower of the Town Wall and block view corridors to the churches of the Old Town.

The State Party also reports on approaches taken to address the problem of transportation of hazardous materials. The State Party notes that this is a large problem involving different jurisdictions. It further indicates the need for amended legislation, and that this could take 10-15 years to be fully resolved. The State Party reports on its commitment to solve these problems, and on actions already initiated in co-operation with the Ministry of Economics and Communication to “rectify the mistakes of the past” including notification to the transportation companies on Paljassaare peninsula to terminate their activities, efforts to move the freight stations of Kopli and Ülemiste, new regulations to forbid transport of dangerous goods during rush hours, efforts to move all petrol storage tanks below ground, the development of a comprehensive plan for North Tallinn which addresses these issues, and the launching of several studies and agreements with the private sector in order to spare Tallinn from the transportation of dangerous goods in future.

Concerning the preparation of a development plan for Tallinn Old Town, the State Party reported that on 25 January 2007, the Tallinn City Council adopted a study entitled "Initiating the elaboration of Tallinn Old Town development plan and defining its primary objective". The development plan, to be prepared by 30 November 2007 and implemented between January 2008 and December 2013, is meant to find appropriate financing mechanisms and spatial and functional solutions, in harmony with the historic fabric of Tallinn Old Town. It will also define a vision for its safeguarding and sustainable development as an authentic and holistic city space. The State Party notes that the process so far has not been perceived by the public as providing opportunity for adequate involvement of the general public and interested NGOs.

The State Party also reports on the development of a Thematic Plan for the "Location of high-rise buildings in Tallinn", aimed to define the general principles for erecting high-rise buildings on the territory of Tallinn as well as to designate areas in Tallinn where the construction of high-rise buildings will be allowed. This plan is currently being reviewed by various city departments including the Tallinn Cultural Heritage Department. The Estonian National Commission for UNESCO has remarked that the thematic plan is mainly focused on “constructing buildings that take into account the interests of private investors rather than safeguarding the unique view corridors to the Old Town and the changing demands of society (less high-rise buildings, more buildings of human dimension)”. The State Party report, citing Paragraph 172 of the Operational Guidelines, which invites States Parties to inform the Committee of their intention to undertake or to authorise in an area protected under the Convention major restorations or new constructions which may affect the outstanding universal value of the property, requested the expert opinion of the World Heritage Centre on the Thematic Plan”, noting that it would appreciate receiving feedback by 31 March 2007. Consequently, the World Heritage Centre sent a letter dated 16 March 2007 to the State Party responding positively to this request and asking for copies of the Thematic Plan for examination and to provide feedback. By the time of preparation of this report, the plan has not been received by the World Heritage Centre and ICOMOS and hence no analysis can yet be provided to the Committee.

The State Party is to be commended for the complete overview of issues presented, and for the openness reflected in efforts to include the expression of both the official views of government agencies and those who might have contrary views. However, a great number of issues still need to be reviewed, including professional assessments of the extension to the Viru Hotel (environment impact report expected June 8, 2007), the response to the initiation of a development plan for the Old Town, and the review of the thematic plan for high rise development.

The World Heritage Centre and ICOMOS are pleased with the State Party’s efforts to address the extension of the Viru Hotel, with the revitalisation of the Skoone Bastion, to reduce risks associated with the inner city transport of hazardous materials, to prepare a five year development plan (2008-2013) and to offer for review, a thematic plan proposal intended to govern the location of high rise structures, and looks forward to future progress reports.

However, both World Heritage Centre and ICOMOS are very concerned with the outcome of efforts to address construction of houses on the section of the town wall between Suurtüki and Rannamäe Street and highlight that the State Court decision to support the developer has not properly taken into account the World Heritage inscription of the Old Town of Tallinn, which obliges the State Party to protect the outstanding universal value of the inscribed property. Either the Court has ignored these obligations or the City of Tallinn has failed to integrate them in its own planning mechanisms. If indeed the developer Restor has satisfied “all endorsements required by law”, the City of Tallinn and the State Party have failed to ensure a fully secure planning framework for review of development proposals reflecting World Heritage commitments.

The World Heritage Centre and ICOMOS note that the Court’s decision should be challenged as it is not in line with the obligations under the 1972 World Heritage Convention. Furthermore, the City of Tallinn should ensure that municipal planning mechanisms provide the opportunity to reject planning proposals which threaten the outstanding universal value of the World Heritage property. Concerning the comprehensive management plan for the property and its buffer zone to provide a long-term framework for decision making, it is noted that this Committee request has not yet been addressed by the State Party.

2. Commends the State Party on its efforts to provide a comprehensive overview of all issues raised by the Committee during its 30th session (Vilnius, 2006);

3. Strongly encourages the State Party to prepare the comprehensive management plan for the property and its buffer zone requested by Decision 30 COM 7B.84 Paragraph 4;

4. Urgently requests the State Party to challenge the State Court’s decision to permit construction of new buildings on the section of the town wall between Suurtüki and Rannamäe Streets, on the basis of the obligations incurred through ratification of the World Heritage Convention;

5. Urges the City of Tallinn to halt any new construction projects and to modify its municipal planning mechanisms to ensure that planning proposals which may threaten the Outstanding Universal Value of the World Heritage property be rejected and submit the Thematic Plan for the “location of high-rise buildings in Tallinn” for examination and feedback by ICOMOS and the World Heritage Centre;

6. Also requests the State Party provide a progress report to the World Heritage Centre on 1 February 2008 providing a response to the above requests for examination by the Committee at its 32nd session in 2008. 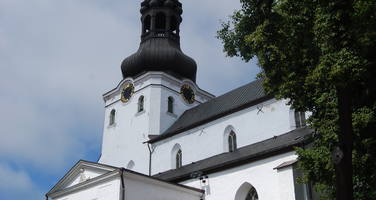