At its 29th session (Durban, 2005), the World Heritage Committee requested the State Party to establish:

a) a site-management entity with full management authority for decision-making on the property, that would be answerable to the Archaeological Survey of India, and provided with all the necessary financial support and expertise;

b) a Management Plan developed with the full involvement of the established management authority, and built around the Statement of Outstanding Universal Value, to ensure the integrated conservation of the property.

The State Party submitted a report on 27 January 2007. The report indicates that the State Government of Gujarat had passed the Champaner-Pavagadh Archaeological Park World Heritage Area Management Authority Act, 2006 (hereafter called “The Act”) constituting an Authority to manage the natural and cultural components of the World Heritage site and ensure its conservation in an integrated manner, to preserve its historical and cultural identity, and to prevent uncontrolled development of the site. The Act came into effect on 9 November 2006.

The State Party states that the Chief Secretary of the Government of Gujarat is the ex-officio Chairperson of the Authority, and the members include the Director-General of the Archaeological Survey of India (ASI), the President of the Vadodara Heritage Trust, as well as the heads of various government departments and local representatives. A Technical Advisory Committee was set up whose members include the Superintending Archaeologist of the ASI-Vadodara Circle, the Director of the State Archaeology Department, representatives of the Department of Archaeology, the University of Vadodara, etc.

The Authority monitors and surveys the World Heritage area and shall prepare and implement development and management plans for the property. The Authority will also be responsible for the adequate protection and promotion of the property and for encouraging research aimed at a better understanding of the site’s Outstanding Universal Value. The ASI will be involved at every stage of these activities.

The Act also constitutes an Authority Fund to raise resources for the management, conservation, monitoring and development of the site. The Authority may accept contributions from the Central and State Governments, local authorities, international organizations, as well as from individual persons or bodies. In order to secure regular funding, the report states that the State Government of Gujarat will provide an annual grant to the Authority.

The State Party also reports that activities aimed at raising public awareness of the values of the site, notably among local communities, have been organised.

The State Party does not provide any information on the progress made in the development of a Management Plan for the property.

3.       Notes the efforts of the State Party on its action in setting up the site-management authority proposed at its 29th session (Durban, 2005);

4.      Taking note of the initiative taken by the State Party to finalize the draft Management Plan by December 2007;

5.       Requests the State Party to submit a progress report on the preparation of its Management Plan to the World Heritage Centre by 1 February 2009, for consideration at its 33rd session in 2009.

3. Notes the efforts of the State Party on its action in setting up the site-management authority proposed at its 29th session (Durban, 2005);

4. Regrets that no information was provided on the progress made in the development of a Management Plan for the property;

5. Requests the State Party to submit a progress report on the preparation of its Management Plan to the World Heritage Centre by 1 February 2009, for consideration at its 33rd session in 2009. 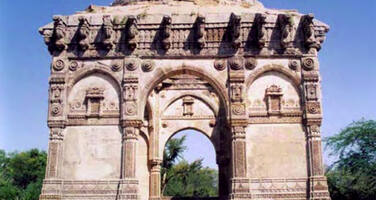