On 31 January 2007 the State Party transmitted to the World Heritage Centre a copy of the Management Plan, a bibliography on rock art, prehistoric and protohistoric contexts, and the findings of Valcamonica.

a) Regarding the high voltage power lines in the immediate vicinity of the property, it is likely that these date from a period prior to the site’s inclusion on the World Heritage List, with the exception of the new S. Fiorano-Robbia 380 kV power line, which runs between Italy and Switzerland. For this line the positioning of pylons was agreed to and accurately checked by the superintendence, who also conducted prior geophysical prospecting and excavations. On this occasion the relocation of some pylons was requested, and obtained, to protect rock art and archaeological sites.

b) With respect to electricity lines built long ago, the Ministry of Cultural Heritage and Activities requested and obtained the transfer of some sections near areas with engraved rocks in the “Parco Archeologico Comunale di Seradina-Bedolina” and the “Parco Archeologico Nazionale dei Massi di Cemmo” (both in Capo di Ponte municipal territory). Valle Camonica is a technological corridor of primary importance, crossed by a series of high-tension lines, whose course has been altered to protect the rock engravings; however, it cannot be removed. On the other hand, these power lines cannot be buried, as this action could physically interfere with engraved rocks.

c) With regard to the conservation of the property: The variability of locations and different state of preservation has determined the emphasis on systematic conservation studies and specific research programmes by the authority in charge, the superintendence. The problem of widespread deterioration of rocks with engravings is partly due to the use of unsuitable methods on the part of those who first recorded the rock art (e.g. the use of chemical agents for cleaning surfaces, the making of casts and removal of covering earth). Since 1992, the agency for Archaeological Heritage of Lombardy has sought to address the problem adequately and prepare a Conservation Plan using appropriate methods on the basis of the examinations and surveys. It has therefore carried out specific analyses and studies on the state of preservation of rocks with engravings to determine the causes of deterioration and the level of pollution.

d) During the preparation of the Management Plan, priority has been given to the definition of boundaries and relative buffer zones for the Rock Art Park, using GIS, and the creation of a database. It was also noted that the preparation of the Management Plan has provided an opportunity to validate regulations protecting areas with rock art and buffer zones; the latter were defined specifically for the Management Plan and have been included in local planning methods. These areas are subject to specific regulations. In order to facilitate the participation of local authorities in the application of measures protecting rock art and its natural surroundings, several brief rules were formulated for parks and rock art sites. These refer to national laws regarding protection, such as the most recent Legislative Decree 42/2004 and have been added to the regulations of existing Park Plans;

ICOMOS and the World Heritage Centre welcome the Management Plan and in particular the detailed and extensive database system for recording the rock art in its immediate rock context, and for the comprehensive project to relate the rock art to the wider settlement patterns of the valleys. The assessment of risks and threats as well as the accessibility of the database on the intranet are also to be commended. The Plan could act as a model for other rock art sites where there is a need to integrate the rock art into the wider archaeological remains and manage it in a sustainable way to provide benefits for local communities.

The State Party did not provide the World Heritage Centre with a progress report taking into account the recommendations of the joint mission, as requested by Decision 29 COM 7B.65.

3.       Welcomes the finalisation of the management plan for the World Heritage property;

4.       Regrets that the State Party did not provide the requested progress report;

5.       Urges the State Party clearly to define the core and buffer zones of the property and submit them to the World Heritage Centre in accordance with the Operational Guidelines;

6.       Requests the State Party to provide an updated report by 1 February 2009 on the state of conservation of the property and on all actions taken in response to the recommendations of the 2004 mission for examination by the Committee at its 33rd session in 2009.

Nomination of natural, mixed and cultural properties to the world heritage list - Rock Drawings of Valcamonica

2. Approves the following Statement of Significance for the Rock Drawings of Valcamonica, Italy:

Valcamonica's rock art, which consists of over 140,000 engravings on about 2,400 rocks distributed on both sides of an entire valley, constitutes an exceptional example of this kind of manifestation of human thought.

The number, duration and variety of the engravings, representing for example navigation, dance, war and ploughing and their relationship with contemporary archaeological sites, contribute to the exceptional value of this assemblage. Furthermore, the apparent continuation of the practice of engraving for a period of more than 8,000 years, from the Epipaleolithic until the Roman and Mediaeval periods, and in some cases until modern times, links this extraordinary expression of human creativity to present day communities.

Criterion (iii): The rock drawings of Valcamonica stretch back over the 8 thousand years which precede our present era. It is unnecessary to accent the conspicuously invaluable nature of human renderings which are of so great an antiquity.

Criterion (vi): The rock drawings of Valcamonica constitute an extraordinary figurative documentation of prehistoric customs and mentality. The systematic interpretation, typological classification, and the chronological study of these configurations in stone have brought about a considerable contribution to the fields of prehistory, sociology and ethnology.

3. Welcomes the finalisation of the management plan for the World Heritage property;

4. Regrets that the State Party did not provide the requested progress report;

5. Urgesthe State Party clearly to define the core and buffer zones of the property and submit them to the World Heritage Centre in accordance with the Operational Guidelines;

6. Requests the State Party to provide an updated report by 1 February 2009 on the state of conservation of the property on all actions taken in response to the recommendations of the 2004 mission for examination by the Committee at its 33rd session in 2009. 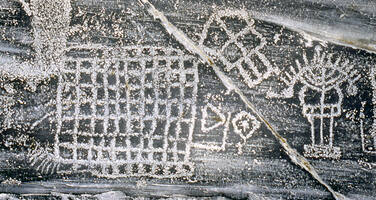