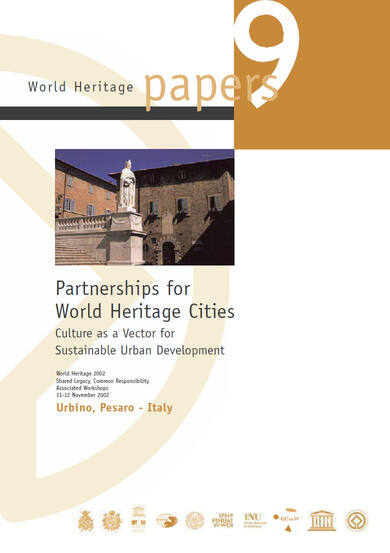 To mark the 30th anniversary of the Convention Concerning the Protection of the World Cultural and Natural Heritage, UNESCO with the support of the Government of Italy, organized, from 14 to 16 November 2002, an International Congress to reflect on some of the main issues, achievements and challenges of the World Heritage mission.

Over 600 experts from around the world gathered at the Giorgio Cini Foundation on the island of San Giorgio in Venice, Italy, to discuss the evolution of the World Heritage Convention and consider its role for the future. In addition, some 400 experts gathered immediately prior to the Congress at nine associated workshops in different Italian cities to reflect on the major themes of the Congress. The nine workshops were:

This publication aims to reflect the discussions and debates around the specific themes as they were discussed over the two days of the workshop. The summary reports of each workshop are also available in the Congress proceedings publication.