World Heritage in the High Seas: An Idea Whose Time Has Come 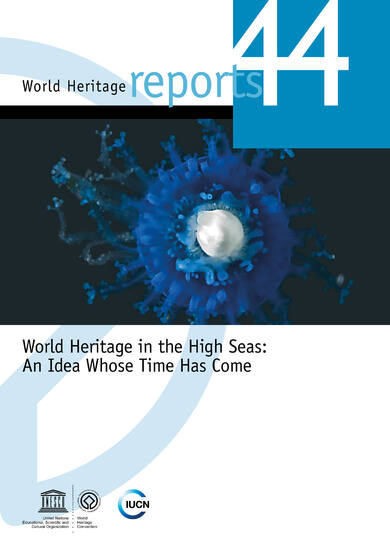 They contain natural wonders equivalent to those on land such as the Grand Canyon National Park in the United States of America, the Galápagos Islands in Ecuador or the Serengeti National Park of the United Republic of Tanzania. They include sunken fossilized islands covered in a staggering diversity of corals and other marine life, giant volcanoes forming vast seamounts that could only dwarf the tallest mountains on land, a ‘floating golden rainforest’ on the ocean surface with its own unique creatures, or even a deep dark place with 60-metrehigh white spires of rock that looks like a lost city beneath the waves. These unique conditions have also given birth to the most unusual species – many still unknown to science. Unique forms of life so extreme they form pivotal case studies for space agencies and others, providing critical analogues to help plan future missions to distant planets in search for life or spur innovation for the next generation of disease treatments.

Nothing in the inspirational vision contained in the 1972 UNESCO Convention concerning the Protection of the World Cultural and Natural Heritage suggests that natural or cultural heritage of Outstanding Universal Value (OUV) located in areas outside national jurisdiction should be excluded from its protection. In 2011, an independent external audit on the Global Strategy of the 1972 World Heritage Convention recommended that the World Heritage Committee reflect on appropriate means to preserve sites that correspond to conditions of OUV which are not dependent upon the sovereignty of States. Indeed, it is difficult to imagine that the Convention’s founders’ far-sighted vision of protection envisaged a future world where we intentionally or accidentally ended up excluding half the surface of the Earth – the open ocean.

This publication is a response to the audit recommendation and shows that the time has indeed come to remedy this historical oversight. It argues, with some vivid illustrations, that there are many sites of potential OUV in areas beyond national jurisdiction. The original vision of the 1972 Convention appears to encompass these sites, but they have been neglected in the development of the procedural means by which inscription takes place. This publication takes a systematic approach to illustrating potential OUV in marine ABNJ, mindful that the purpose is not to produce an official tentative list of sites but rather to demonstrate through a small number of illustrations the need for, and the urgency of, extending the provisions of the Convention to the other half of the planet, and to illustrate a sample of the variety of differing types of potential OUV that exist in the open ocean and seabed beyond national jurisdiction.

Further, the publication explores the mechanisms by which the States Parties to the World Heritage Convention could consider implementing changes to allow the inscription and protection of sites in marine ABNJ on the UNESCO World Heritage List. It does not recommend any particular approach but does seek to explore briefly the arguments for and against each, recognizing that not all of these options are equally practicable. In short, there are realistically three possible modalities: 1) Bold interpretation of the Convention, either through incremental change or a formal policy change; 2) Amendment outside the terms of the 1972 Agreement akin to the 1994 Part XI Implementing Agreement to the United Nations Convention on the Law of the Sea (UNCLOS); and 3) An optional protocol to the 1972 Convention, developed through an international negotiation among States Parties, binding only those States that choose to ratify any resulting protocol.

Finally, the publication highlights the fact that in 2016 the United Nations General Assembly (UNGA) started a process leading to the negotiation of a legally binding instrument under UNCLOS on the conservation and sustainable use of biological diversity in ABNJ. This process is separate from discussions within the World Heritage Convention’s network but strongly underlines the fact that World Heritage in the High Seas is indeed ‘an idea whose time has come’.

This publication was made possible thanks to the support of the Khaled bin Sultan Living Oceans Foundation, the French Marine Protected Areas Agency and ongoing support of the Swiss watch manufacture Jaeger-LeCoultre. Additional support was provided by the Nekton Foundation.