Human origin sites and the World Heritage Convention in Asia 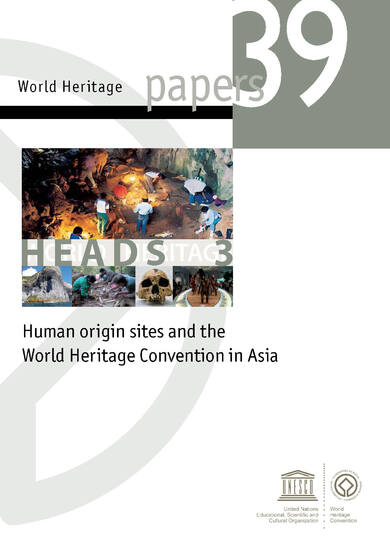 Prehistoric sites are the cornerstone for research into the origins of humanity, its evolution and social development – but they are underrepresented in the UNESCO World Heritage List.

We are all familiar with iconic prehistoric sites in Africa, Latin America and Europe but less so with such sites in Asia. This must change, as Asia holds a wealth of data, which includes some startling challenges to traditional archaeological paradigms of the emergence and dispersal of modern humans. What is more, Asia hosts several renowned World Heritage sites, including the Peking Man Site at Zhoukoudian in the Peoples’ Republic of China and the Sangiran Early Man Site in Indonesia.

This issue of World Heritage Papers tackles these questions head-on – exploring recent research programmes, ideas and debates that are lifting the profile of Asia in human evolution studies, while addressing the practical issues of site protection and management. The result is a fascinating compendium that reflects the international and interdisciplinary approach that inspires all work under the World Heritage Convention. Following the lead of the HEADS Thematic Programme for World Heritage, this issue builds on the vibrant archaeological research presented at the conference, entitled 'Human Origins Sites in Asia and World Heritage Convention,' held at the Jeongok Prehistory Museum in the Republic of Korea in September 2012. This was a ground-breaking conference for human evolution studies in Asia and across the world.

Together, we seek to ensure that Asian archaeological human origins sites are recognized, appreciated, and safeguarded for future generations of researchers. For this, we need scientific rigour, methodological innovation, public outreach along with site protection and, most importantly, international cooperation.

This issue of World Heritage Papers brings all of this together, and is another step to enhancing the implementation of the World Heritage Convention in this crucial area.