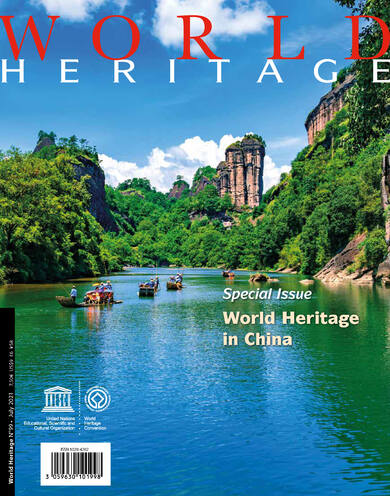 It is a great pleasure to meet for this extended 44th session of the World Heritage Committee to be held from 16 to 31 July 2021 in Fuzhou, China and online.

In addition to its numerous cultural, natural and mixed sites inscribed on UNESCO’s World Heritage List, China has 12 Creative Cities, 34 Biosphere Reserves and 41 Global Geoparks. All of these represent the far-reaching and sustainable actions that China undertakes to protect its heritage and its cultural and biological diversity, supporting the broad mandate of UNESCO.

In this issue of the World Heritage Review, we learn about the strategies devised to preserve and protect China’s cultural and natural heritage, the activities furthering youth education, awareness raising and international collaboration, and many other actions to safeguard and celebrate this ancient civilization in its diverse environments, now and in the future.

Also included in the issue is an exclusive interview with H.E. Mr Tian Xuejun, Vice-Minister of Education of the People’s Republic of China, and Chairperson of the 44th session of the World Heritage Committee.

I would like to express my warm thanks to China for hosting this meeting, and I look forward to a stimulating and constructive session of working together towards the global conservation of World Heritage.

Inheriting civilization and laying a foundation for a better future – World Heritage education in China H.E. Mr Chen Baosheng, Minister of Education of the People’s Republic of China