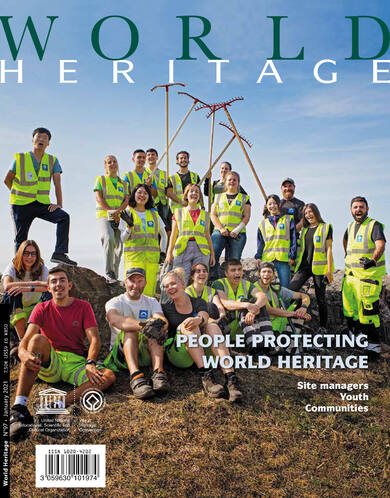 The World Heritage Convention was created in 1972 – nearly half a century ago – as a legal instrument to protect our most outstanding cultural and natural sites around the world. It has been adopted since by 194 countries, nearing universality. Concretely, the World Heritage Convention is implemented in myriad ways, big and small, by people around the world.

In this issue, we introduce you to numerous individuals who dedicate their careers – even their lives – to taking care of these precious and fragile sites. This includes site managers on the ground, young people who run projects for hands-on heritage conservation or awareness raising to save sites, and civil society activists who protect sites, and the people who live near them, in difficult conditions.

We meet Tania Zaven in Lebanon, who is steering the archaeological site of Byblos, one of the world’s oldest continuously inhabited cities, through the economic and COVID-19 crisis. Bantu Lukambo tells us about the association he helped create to support families in Virunga National Park (Democratic Republic of the Congo) with income-generating activities such as rabbit farming, in an insecure situation. In Kasuga Village, part of the Hidden Christian Sites in the Nagasaki Region in Japan, the community’s storytellers welcome visitors and share their history of worshipping in secret in sacred places.

The younger generations are also very active. Addressing current challenges of climate change, specific threats to heritage sites or biodiversity loss, these young people are working for a brighter future, despite the COVID-19 pandemic. Among them are Jeremy Ragain who co-led the Aldabra Clean-up Project in the Seychelles, and youths in the Arab Region who create heritage and peace-building projects, including mobile applications promoting sites in Tunisia and a digital geodatabase for Iraqi sites.

These and other stories offer a glimpse of the multiple and diverse contributions that people around the globe are making every day to the protection of our extraordinary World Heritage. They remind us that we all have a part to play in creating a better world.

Byblos and COVID-19 Tania Zaven, manager of the Byblos archaeological site in Lebanon, talks about the property’s closure during the COVID-19 pandemic.

ICCROM: Capacity-building: supporting the people to protect the heritage.

Support for animal surveillance in Pendjari and W National Parks (Benin); Early notification of collapse of House of Wonders in Zanzibar.