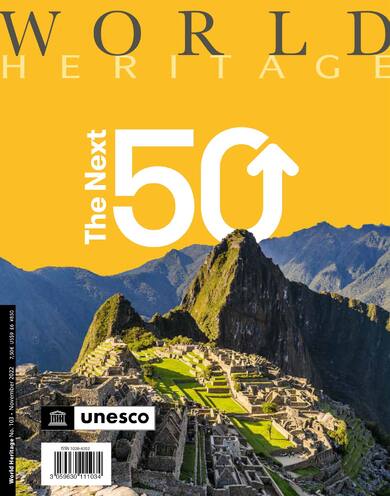 It is a great pleasure for me to share this 50th anniversary of the World Heritage Convention celebration with you.

Over the past five decades, the World Heritage Convention has protected and promoted humanity’s treasures and transformed the way we value and safeguard heritage.

In this issue we look at a few key sites that have marked turning points for the Convention, such as the introduction of cultural landscapes with Tongariro in New Zealand, the inspiring collaboration among communities that helped save the Belize’s Barrier Reef Reserve System, and the story of the historic conviction for intentional destruction of heritage in Timbuktu, Mali. We are also privileged to have a message from Mr Ernesto Ottone R., UNESCO’s Assistant DirectorGeneral for Culture.

This year is a celebration, but also an occasion to look to the future and at the issues that we must tackle together, such as climate change, better regional representation of sites and sustainable tourism. These topics were discussed during the 50 Minds dialogues. You will find the summary of rich interdisciplinary discussions in this issue.

The World Heritage sites, currently 1,154 in 167 countries, serve as climate disruption observatories to gather and share information on applied and tested monitoring, mitigation and adaptation practices. The global network also helps raise awareness of the impacts of climate change on human societies and cultural diversity, biodiversity and ecosystem services, and the world’s natural and cultural heritage. We have recently co-published reports measuring the increasing levels of carbon in forests and of blue carbon in the oceans worldwide — both landmark studies which contribute to global efforts to address these issues.

Another of UNESCO’s priorities is World Heritage in Africa. Today, sub-Saharan Africa accounts for only approximately one-tenth of the sites inscribed, despite having represented one-third of the twelve sites inscribed when the List began in 1978. At the same time, African sites account for nearly 40 per cent of the endangered sites inscribed on the World Heritage List and must be better protected. In the coming years, African heritage must be finally acknowledged in accordance with its true historic, human and natural importance.

World Heritage sites are recognized as being of outstanding value to all of humanity. They are what we pass on to future generations, and safeguarding these sites concerns every one of us. As we celebrate together the achievements of the past 50 years of heritage preservation, we also chart the next 50 years. I look forward to doing this with you.

Stories of sites
Powerful examples of the Convention

Snapshots
Selected images of the 1,154 sites