UNESCO has invited experts from both inside and outside of Libya to urgently examine the preservation of cultural heritage in the country, notably measures to safeguard cultural sites; prevent illicit trafficking, protect museums and strengthen cultural institutions in the wake of civil strife and the overthrow of the Gaddafi regime. The meeting - the first on protecting Libyan cultural heritage after the fall of the regime - will take place at UNESCO Headquarters in Paris on 21 October.

A press conference will be held during the meeting (1 p.m. Room VIII).

Irina Bokova, the Director-General of UNESCO, will open the session, during which experts will discuss the findings of the mission to Libya organized in late September by the Association of National Committees of the Blue Shield. The Blue Shield is the distinctive emblem created by the Convention for the Protection of Cultural Property in the Event of Armed Conflict, (The Hague, 1954).*

Libya has five official UNESCO cultural heritage sites that reflect the country’s strategic geographic positioning through the intermingling of cultures and regional influence.  See, for instance, Leptis Magna, a prominent city of the Roman Empire, and also Cyrene, one of the principal cities of the Greek Hellenic world – both of these are UNESCO-designated heritage sites in Libya. In addition to these, the Libyan cultural heritage sites include Sabratha, a Phoenician trading post that served as an outlet for African goods; the rock art sites of Algeria-abutting Tadrart Acacus which features thousands of cave paintings dating from 12,000 B.C. to A.D. 100; and the old town of Ghadamès, which is one of the oldest pre-Saharan cities still in existence. 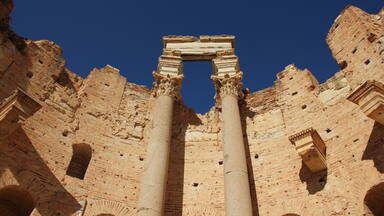