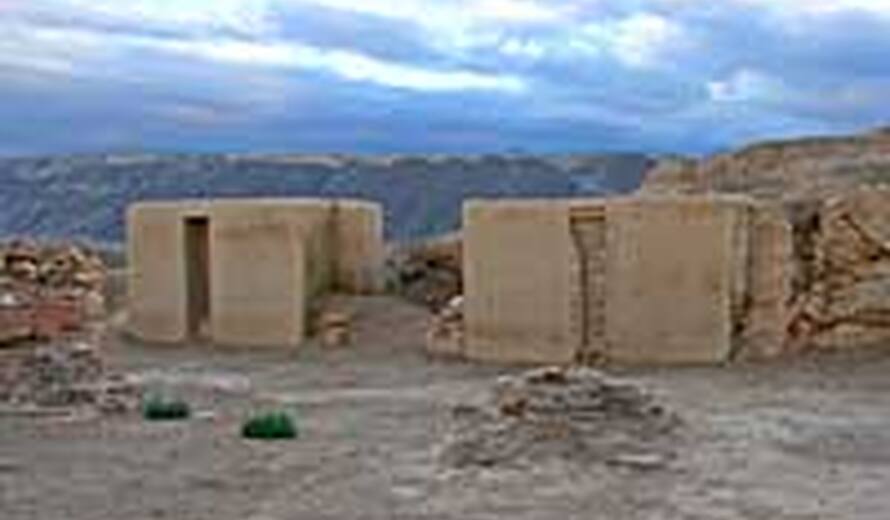 The Iwami Ginzan Silver Mine, south-west of Honshu Island, is a cluster of mountains, rising to 600 metres and interspersed by deep river valleys featuring the archaeological remains of large-scale mines, smelting and refining sites and mining settlements worked between the 16th and 20th centuries. The site also features transportation routes used to transport silver ore to the coast, and port towns from where it was shipped to Korea and China. The high quality of the silver resulting from the use of advanced techniques, and the quantity of silver mined, contributed substantially to the overall economic development of Japan and southeast Asia in the 16th and 17th centuries, and prompted the mass production of silver and gold in Japan. The mining area is now heavily wooded. Included in the site are fortresses, shrines, parts of Kaidô transportation routes to the coast and three port towns, Tomogaura, Okidomari and Yunotsu, from where the ore was shipped. The property extends to 442 ha. and the buffer zone 3,221 ha.

Parthian Fortresses of Nisa consists of two tells of Old and New Nisa which indicate the site of one of the earliest and most important cities of the Parthian Empire, was a major power from the mid 3rd century BC to the 3rd century AD. They have been relatively undisturbed for nearly two millennia and conserve the unexcavated remains of an ancient civilization which skilfully combined its own traditional cultural elements with those of the Hellenistic and Roman west. Archaeological excavations in two parts of the site have revealed richly decorated architecture, illustrative of domestic, state, and religious functions. Most of the excavation to date has been carried out at the Royal citadel, now known as Old Nisa, but the site also includes the ancient town, known as New Nisa. Old Nisa is a 14-ha tell shaped like an irregular pentagon and surrounded by a high defensive earth rampart with more than 40 rectangular towers, its corners flanked by powerful bastions. The 25-ha tell of New Nisa is surrounded by powerful walls, up to 9m high on all sides, with two entrances. Situated at the crossroads of important commercial and strategic axes, the archaeological remains of Nisa vividly illustrate the significant interaction of cultural influences from central Asia and the Mediterranean in this powerful empire which formed a barrier to Roman expansion while serving as an important communication and trading centre between east and west, north and south. The site testifies to the significance of this imperial power, to its wealth and culture.

Inaugurated in 1973, the Sydney Opera House, is listed as a great architectural work of the 20th century that brings together multiple strands of creativity and innovation, both in architectural form and structural design. A great urban sculpture set in a remarkable waterscape, at the tip a peninsula projecting into Sydney Harbour, the building has had an enduring influence on architecture. The Opera House comprises three groups of interlocking vaulted ‘shells' which roof two main performances halls and a restaurant. These shell-structure are set upon a vast platform and are surrounded by terrace areas that function as pedestrian concourses. In 1957, when the project of the Sydney opera was attributed by an international jury to the then almost unknown Danish architect Jørn Utzon, it marked a radically new and collaborative approach to construction. In listing the building, the Sydney Opera House is recognized as a great artistic monument accessible to society at large.

The Red Fort Complex was built as the palace fort of Shahjahanabad - the new capital of the 5th Mughal Emperor of India, Shahjahan (1628-58). It gets its name from its massive enclosing walls of red sandstone. It is adjacent to an older fort, the Salimgarh, built by Islam Shah Sur in 1546, with which it forms the Red Fort Complex. The private apartments consist of a row of pavilions connected by a continuous water channel, known as the Nahr-i-Behisht, or the Stream of Paradise. The palace was designed as an imitation of paradise as described in the Koran; a couplet inscribed in the palace reads, ‘If there be a paradise on earth, it is here, it is here'. The Red Fort is considered to represent the zenith of Mughal creativity which, under the Emperor Shahjahan, was brought to a new level of refinement. The planning of the palace is based on Islamic prototypes, but each pavilion reveals architectural elements typical of Mughal building, reflecting a fusion of Persian, Timurid and Hindu traditions The Red For's innovative planning and architectural style, including its garden design, strongly influenced later buildings and gardens in Rajasthan, Delhi, Agra and further afield. The monument's significance is further enhanced by the importance of events that happened. Through its fabric, the complex reflects all phases of Indian history from the Mughal period to independence.